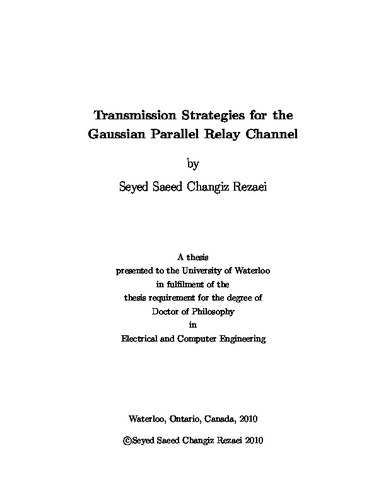 Cooperative wireless communication has received significant attention during recent years due to several reasons. First, since the received power decreases rapidly with distance, the idea of multi-hopping is becoming of particular importance. In multi-hopped communication, the source exploits some intermediate nodes as relays. Then the source sends its message via those relays to the destination. Second, relays can emulate some kind of distributed transmit antennas to form spatial diversity and combat multi-path fading effect of the wireless channel. Parallel Relay Channel is an information theoretical model for a communication system whereby a sender aims to communicate to a receiver with the help of relay nodes. It represents the simplest model for a multi–hop wireless network and a full understanding of the limits of communication over such a channel can potentially shed light on the design of more efficient wireless networks. However, the capacity of the relay channel has been established only for few special cases and little progress has been made toward solving the general case since the early 1980s. In this dissertation, motivated by practical constraints, we study the information theoretical limits of the half-duplex Gaussian Parallel Relay channel , as well as, the transmission strategies for the parallel relay channel with bandwidth mismatch between the first and the second hops. Chapter 2 investigates the problem of communication for a network composed of two half-duplex parallel relays with additive white Gaussian noise (AWGN). There is no direct link between the source and the destination. However, the relays can communicate with each other through the channel between them. Two protocols, i.e., \emph{Simultaneous} and \emph{Successive} relaying, associated with two possible relay scheduling are proposed. The simultaneous relaying protocol is based on \emph{Broadcast-multiaccess with Common Message (BCM)} scheme. For the successive relaying protocol: (i) a \emph{Non-Cooperative} scheme based on the \emph{Dirty Paper Coding (DPC)}, and (ii) a \emph{Cooperative} scheme based on the \emph{Block Markov Encoding (BME)} are considered. The composite scheme of employing BME in \emph{at most} one relay and DPC in \emph{at least} another one is shown to achieve at least the same rate when compared to the \emph{Cooperative} and \emph{Non-Cooperative} schemes. A \emph{``Simultaneous-Successive Relaying based on Dirty paper coding scheme" (SSRD)} is also proposed. The optimum scheduling of the relays and hence the capacity of the half-duplex Gaussian parallel relay channel in the low and high signal-to-noise ratio (SNR) scenarios is derived. In the low SNR scenario, it is revealed that under certain conditions for the channel coefficients, the ratio of the achievable rate of the simultaneous relaying based on BCM to the cut-set bound tends to be 1. On the other hand, as SNR goes to infinity, it is proved that successive relaying, based on the DPC, asymptotically achieves the capacity of the network. Schein and Gallager introduced the Gaussian parallel relay channel in 2000. They proposed the Amplify-and-Forward (AF) and the Decode-and-Forward (DF) strategies for this channel. For a long time, the best known achievable rate for this channel was based on the AF and DF with time sharing (AF-DF). Recently, a Rematch-and-Forward (RF) scheme for the scenario in which different amounts of bandwidth can be assigned to the first and second hops were proposed. In chapter 3, we propose a \emph{Combined Amplify-and-Decode Forward (CADF)} scheme for the Gaussian parallel relay channel. We prove that the CADF scheme always gives a better achievable rate compared to the RF scheme, when there is a bandwidth mismatch between the first hop and the second hop. Furthermore, for the equal bandwidth case (Schein's setup), we show that the time sharing between the CADF and the DF schemes (CADF-DF) leads to a better achievable rate compared to the time sharing between the RF and the DF schemes (RF-DF) as well as the AF-DF.