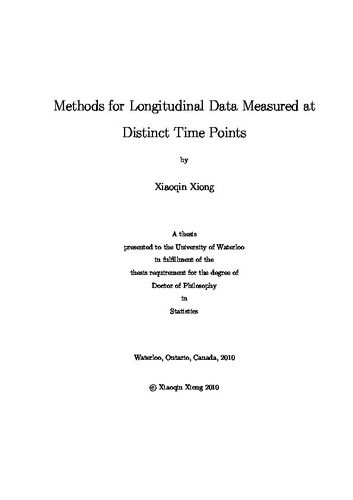 For longitudinal data where the response and time-dependent predictors within each individual are measured at distinct time points, traditional longitudinal models such as generalized linear mixed effects models or marginal models cannot be directly applied. Instead, some preprocessing such as smoothing is required to temporally align the response and predictors. In Chapter 2, we propose a binning method, which results in equally spaced bins of time for both the response and predictor(s). Hence, after incorporating binning, traditional models can be applied. The proposed binning approach was applied on a longitudinal hemodialysis study to look for possible contemporaneous and lagged effects between occurrences of a health event (i.e., infection) and levels of a protein marker of inflammation (i.e., C-reactive protein). Both Poisson mixed effects models and zero-inflated Poisson (ZIP) mixed effects models were applied to the subsequent binned data, and some important biological findings about contemporaneous and lagged associations were uncovered. In addition, a simulation study was conducted to investigate various properties of the binning approach. In Chapter 3, asymptotic properties have been derived for the fixed effects association parameter estimates following binning, under different data scenarios. In addition, we propose some leave-one-subject-out cross-validation algorithms for bin size selection. In Chapter 4, in order to identify levels of a predictor that might be indicative of recently occurred event(s), we propose a generalized mixed effects regression tree (GMRTree) based method which estimates the tree by standard tree method such as CART and estimates the random effects by a generalized linear mixed effects model. One of the main steps in this method was to use a linearization technique to change the longitudinal count response into a continuous surrogate response. Simulations have shown that the GMRTree method can effectively detect the underlying tree structure in an applicable longitudinal dataset, and has better predictive performance than either a standard tree approach without random effects or a generalized linear mixed effects model, assuming the underlying model indeed has a tree structure. We have also applied this method to two longitudinal datasets, one from the aforementioned hemodialysis study and the other from an epilepsy study.