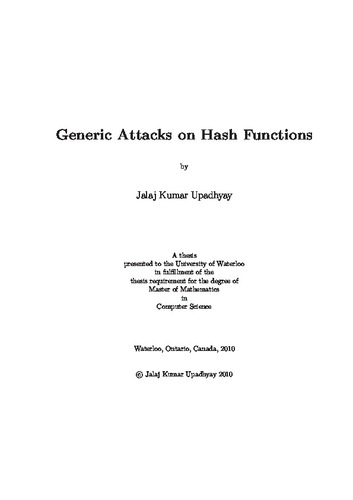 The subject of this thesis is a security property of hash functions, called chosen-target forced-prefix preimage (CTFP) resistance and the generic attack on this property, called the herding attack. The study of CTFP resistance started when Kelsey-Kohno introduced a new data structure, called a diamond structure, in order to show the strength of a CTFP resistance property of a hash function. In this thesis, we concentrate on the complexity of the diamond structure and its application in the herding attack. We review the analysis done by Kelsey and Kohno and point out a subtle flaw in their analysis. We propose a correction of their analysis and based on our revised analysis, calculate the message complexity and the computational complexity of the generic attacks that are based on the diamond structure. As an application of the diamond structure on generic attacks, we propose a multiple herding attack on a special generalization of iterated hash functions, proposed by Nandi-Stinson.