Characterizing the Psychophysiological Signature of Boredom 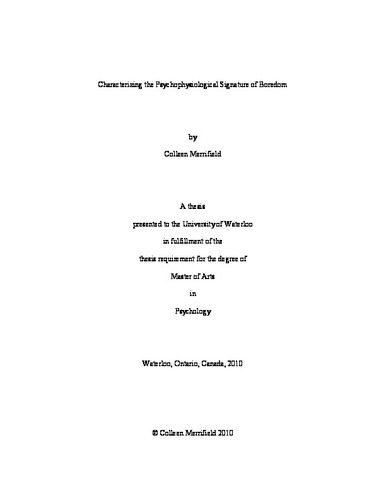 Recent research has suggested that boredom is a construct that can be distinguished from similar affective states including apathy, anhedonia, and depression, using self-reports. The current study investigated whether boredom and sadness (an analogue for depression) are distinct in terms of their physiological signatures. State boredom and sadness were induced in a group of healthy participants while their physiological parameters of heart rate (HR), skin conductance (SCL), and cortisol levels were monitored. Results indicated that the autonomic nervous system response for both states can be characterized by directional fractionation, with boredom resulting in increased HR but decreased SCL relative to sadness. Cortisol levels were higher after the boring induction than the sad induction, indicating increased hypothalamic-pituitary-adrenal axis activation for boredom. Overall, boredom appears to have a physiological signature that is distinguishable from a primary symptom of depression.