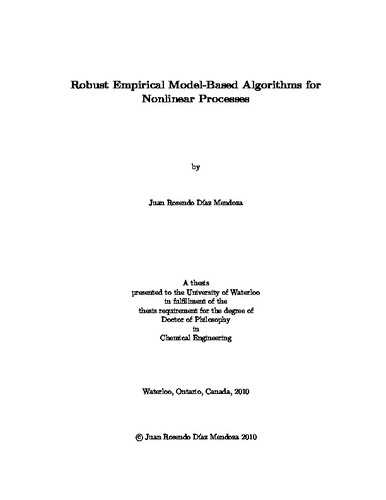 This research work proposes two robust empirical model-based predictive control algorithms for nonlinear processes. Chemical process are generally highly nonlinear thus predictive control algorithms that explicitly account for the nonlinearity of the process are expected to provide better closed-loop performance as compared to algorithms based on linear models. Two types of models can be considered for control: first-principles and empirical. Empirical models were chosen for the proposed algorithms for the following reasons: (i) they are less complex for on-line optimization, (ii) they are easy to identify from input-output data and (iii) their structure is suitable for the formulation of robustness tests. One of the key problems of every model that is used for prediction within a control strategy is that some model parameters cannot be known accurately due to measurement noise and/or error in the structure of the assumed model. In the robust control approach it is assumed that processes can be represented by models with parameters' values that are assumed to lie between a lower and upper bound or equivalently, that these parameters can be represented by a nominal value plus uncertainty. When this uncertainty in control parameters is not considered by the controller the control actions might be insufficient to effectively control the process and in some extreme cases the closed-loop may become unstable. Accordingly, the two robust control algorithms proposed in the current work explicitly account for the effect of uncertainty on stability and closed-loop performance. The first proposed controller is a robust gain-scheduling model predictive controller (MPC). In this case the process is represented within each operating region by a state-affine model obtained from input-output data. The state-affine model matrices are used to obtain a state-space based MPC for every operating region. By combining the state-affine, disturbance and controller equations a closed-loop representation was obtained. Then, the resulting mathematical representation was tested for robustness with linear matrix inequalities (LMI's) based on a test where the vertices of the parameter box were obtained by an iterative procedure. The result of the LMI's test gives a measure of performance referred to as γ that relates the effect of the disturbances on the process outputs. Finally, for the gain-scheduling part of the algorithm a set of rules was proposed to switch between the available controllers according to the current process conditions. Since every combination of the controller tuning parameters results in a different value of γ, an optimization problem was proposed to minimize γ with respect to the tuning parameters. Accordingly, for the proposed controller it was ensured that the effect of the disturbances on the output variables was kept to its minimum. A bioreactor case study was presented to show the benefits of the proposed algorithm. For comparison purposes a non-robust linear MPC was also designed. The results show that the proposed algorithm has a clear advantage in terms of performance as compared to non-robust linear MPC techniques. The second controller proposed in this work is a robust nonlinear model predictive controller (NMPC) based on an empirical Volterra series model. The benefit of using a Volterra series model for this case is that its structure can be split in two sections that account for the nominal and uncertain parameter values. Similar to the previously proposed gain-scheduled controller the model parameters were obtained from input-output data. After identifying the Volterra model, an interconnection matrix and its corresponding uncertainty description were found. The interconnection matrix relates the process inputs and outputs and is built according to the type of cost function that the controller uses. Based on the interconnection representing the system a robustness test was proposed based on a structured singular value norm calculation (SSV). The test is based on a min-max formulation where the worst possible closed-loop error is minimized with respect to the manipulated variables. Additional factors that were considered in the cost function were: manipulated variables weighting, manipulated variables restrictions and a terminal condition. To show the benefits of this controller two case studies were considered, a single-input-single-output (SISO) and a multiple-input-multiple-output (MIMO) process. Both case studies show that the proposed controller is able to control the process. The results showed that the controller could efficiently track set-points in the presence of disturbances while complying with the saturation limits imposed on the manipulated variables. This controller was also compared against a non-robust linear MPC, non-robust NMPC and non-robust first-principles NMPC. These comparisons were performed for different levels of uncertainty and for different values of the suppression or control actions weights. It was shown through these comparisons that a tradeoff exists between nominal performance and robustness to model error. Thus, for larger weights the controller is less aggressive resulting in more sluggish performance but less sensitivity to model error thus resulting in smaller differences between the robust and non-robust schemes. On the other hand when these weights are smaller the controller is more aggressive resulting in better performance at the nominal operating conditions but also leading to larger sensitivity to model error when the system is operated away from nominal conditions. In this case, as a result of this increased sensitivity to model error, the robust controller is found to be significantly better than the non-robust one.