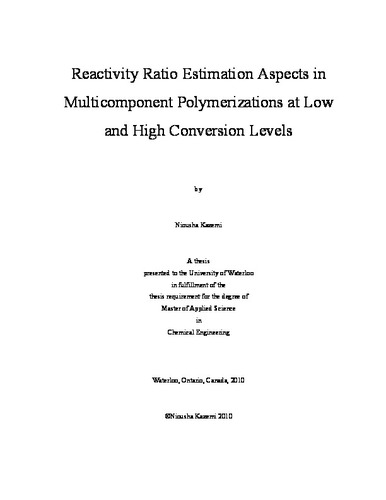 Estimation of reactivity ratios from cumulative copolymerization models eliminates the difficulties associated with stopping reactions at low conversion, while one gains to study the full polymerization trajectory. The parameter estimation technique used in this research is the error-in-variables-model (EVM) method, which has been shown to be the most appropriate one for parameter estimation. Two cumulative model forms, the analytical integration of the differential composition equation or Meyer-Lowry model and the one resulting from the direct numerical integration of the differential composition equation, are employed. Our results show that using the cumulative models enhance reactivity ratio estimation results in copolymerizations. In particular, it is illustrated that the latter approach is a novel and more direct method of estimating the reactivity ratios through a step-by-step integration of the copolymerization composition ordinary differential equation. Due to the fact that multicomponent polymerizations have become increasingly important and having a good knowledge of polymerization parameters, among which reactivity ratios are the most important ones, would be very helpful, our research also looked at potential enhancements in reactivity ratio estimation for ternary systems by applying the estimation directly on terpolymerization experimental data (instead of dealing with three (often non-representative) binary copolymerizations). Conclusions from several case studies and experimental data sets illustrate that using the ternary system data is superior to previous practice. Another related issue in multicomponent polymerizations is the existence of an azeotropic point. The feed composition of such a point would result in polymer products with homogeneous composition. Predicting the existence and also calculating the composition of the azeotropic point can reduce the effort of running costly experiments, in that computational results can be used to narrow the experimental search space. Although many attempts have been made to clarify the issue of the existence of azeotropic points in multicomponent polymerization systems, this question is still open. We propose a general numerical approach that reliably finds any and all azeotropic compositions in multicomponent systems.