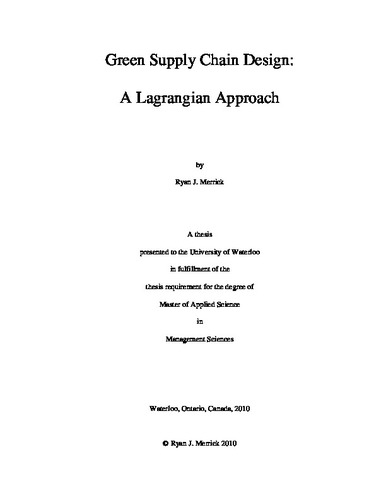 The expansion of supply chains into global networks has drastically increased the distance travelled along shipping lanes in a logistics system. Inherently, the increase in travel distances produces increased carbon emissions from transport vehicles. When increased emissions are combined with a carbon tax or emissions trading system, the result is a supply chain with increased costs attributable to the emission generated on the transportation routes. Most traditional supply chain design models do not take emissions and carbon costs into account. Hence, there is a need to incorporate emission costs into a supply chain optimization model to see how the optimal supply chain configuration may be affected by the additional expenses. This thesis presents a mathematical programming model for the design of green supply chains. The costs of carbon dioxide (CO2) emissions were incorporated in the objective function, along with the fixed and transportation costs that are typically modeled in traditional facility location models. The model also determined the unit flows between the various nodes of the supply chain, with the objective of minimizing the total cost of the system by strategically locating warehouses throughout the network. The literature shows that CO2 emissions produced by a truck are dependent on the weight of the vehicle and can be modeled using a concave function. Hence, the carbon emissions produced along a shipping lane are dependent upon the number of units and the weight of each unit travelling between the two nodes. Due to the concave nature of the emissions, the addition of the emission costs to the problem formulation created a nonlinear mixed integer programming (MIP) model. A solution algorithm was developed to evaluate the new problem formulation. Lagrangian relaxation was used to decompose the problem by echelon and by potential warehouse site, resulting in a problem that required less computational effort to solve and allowed for much larger problems to be evaluated. A method was then suggested to exploit a property of the relaxed formulation and transform the problem into a linear MIP problem. The solution method computed the minimum cost for a complete network that would satisfy all the needs of the customers. A primal heuristic was introduced into the Lagrangian algorithm to generate feasible solutions. The heuristic utilized data from the Lagrangian subproblems to produce good feasible solutions. Due to the many characteristics of the original problem that were carried through to the subproblems, the heuristic produced very good feasible solutions that were typically within 1% of the Lagrangian bound. The proposed algorithm was evaluated through a number of tests. The rigidity of the problem and cost breakdown were varied to assess the performance of the solution method in many situations. The test results indicated that the addition of emission costs to a network can change the optimal configuration of the supply chain. As such, this study concluded that emission costs should be considered when designing supply chains in jurisdictions with carbon costs. Furthermore, the tests revealed that in regions without carbon costs it may be possible to significantly reduce the emissions produced by the supply chain with only a small increase in the cost to operate the system.