The North House as Responsive Architecture: Designing for Interaction between Building, Inhabitant, and Environment 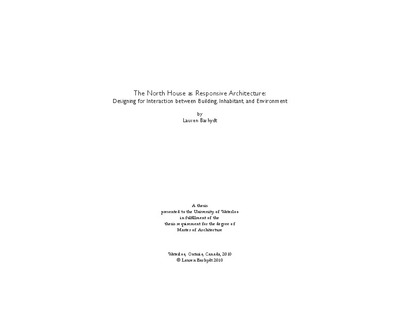 The North House is a proof-of-concept prefabricated solar-powered home designed for northern climates, and intended for the research and promotion of high-performance sustainable architecture. Led by faculty at the University of Waterloo, the project was undertaken by Team North a broad collaboration between faculty and students at the Universities of Waterloo, Ryerson and Simon Fraser. In October 2009, the North House prototype competed in the U.S. Department of Energy’s Solar Decathlon, where it placed fourth overall. The North House addresses the urgent environmental imperative to dramatically reduce energy consumed by the built environment. It does so, in part by employing two primary technological systems which make use of feedback and response mechanisms; the Distributed Responsive System of Skins (DReSS) reconfigures the envelope in response to changing weather conditions, while the Adaptive Living Interface System (ALIS) provides detailed performance feedback to the inhabitant, equipping them with informed control of their home. This thesis recognizes energy consumption as a socio-technical problem that implicates building inhabitants as much as buildings themselves. It also recognizes the particular potency of the ‘house’ as a building type that touches a broad population in a profoundly personal way; and is thus an apt testing ground for technologies that conserve energy, and those that teach occupants to do the same. With these ideas in mind, the thesis looks to Interactive Architecture - a practice that considers buildings and their inhabitants as an integrated system - as a promising conceptual framework for synthesizing the social and technical aspects of energy conservation in the home.