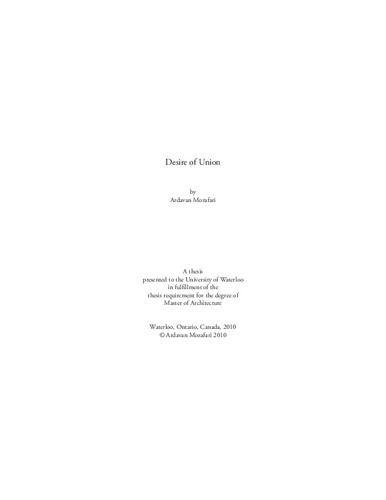 In our modern world, a signifi cant number of traditional values have been dramatically manipulated, taking on new meanings and definitions quite diff erent from their original or natural signifi cance. Moreover, these traditional values are being replaced by new ones deemed more suitable to today’s world. Ideas such as selfl essness, humility, and longing, among others, have seemingly lost value as a consequence of the frantic pace of modern life and replaced by self-centredness, greed,aridity, exteriority, which will have a direct impact on our surrounding environment. Let’s imagine a land in which selfi shness is not a priority. Instead, replace it with a society driven by humane preferences. Would the architecture of that society still look like ours does today? Would it be as unsociable as it is in our so-called advanced civilization? This thesis investigates this query through a juxtaposition of the traditional values of a Persian art with the demands of modern life. It is a study of the calligraphic art of Iran as a transcendental practice, highly intertwined with strong emotions, wherein the intention of the research is to discover the relationship between Persian calligraphy and architecture. Presenting calligraphy as a context for understanding architecture has the potential to get beyond ourselves in the spaces we author. This research aims to allow the essence of Persian calligraphy into modern space as a means to revive the true essence of architecture: reunion of feeling and space, a concept that is given too little attention in our current architecture.