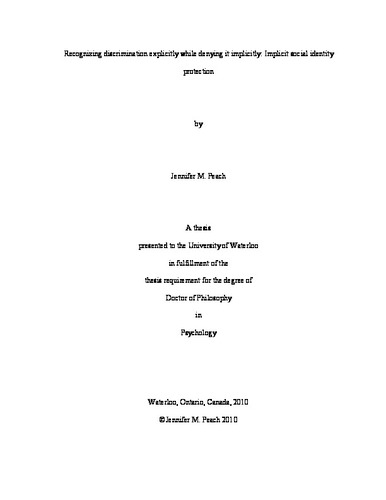 Past research suggests that members of devalued groups recognize their group is discriminated against. Do the implicit responses of members of these groups demonstrate the same pattern? I argue that they do not and that this is due to a motivated protection of members of devalued groups’ social identity. Study 1 demonstrates that, at an explicit level African-Canadians recognize that their group is discriminated against, but at an implicit level African-Canadians think that most people like their group to a greater extent than do European-Canadians. Study 2 replicates this implicit finding but demonstrates that devalued and majority groups do not have different implicit normative regard about a non-devalued group. Study 3 again replicates the implicit finding with Muslim participants while demonstrating that, when affirmed, this group difference disappears. Study 4 demonstrates that implicit normative regard can predict collective action over and above implicit attitudes and explicit normative regard. The implications for social identity theory and collective action are discussed.