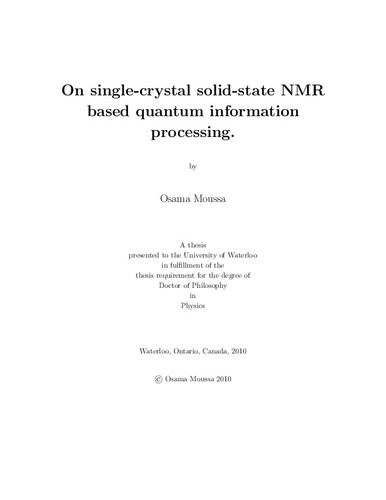 Quantum information processing devices promise to solve some problems more efficiently than their classical counterparts. The source of the speedup is the structure of quantum theory itself. In that sense, the physical units that are the building blocks of such devices are its power. The quest then is to find or manufacture a system that behaves according to quantum theory, and yet is controllable in such a way that the desired algorithms can be implemented. Candidate systems are benchmarked against general criteria to evaluate their success. In this thesis, I advance a particular system and present the progress made towards each of these criteria. The system is a three-qubit 13C solid-state nuclear magnetic resonance (NMR) based quantum processor. I report results concerning system characterization and control, pseudopure state preparation, and quantum error correction. I also report on using the system to test a central question in the foundation of quantum mechanics.