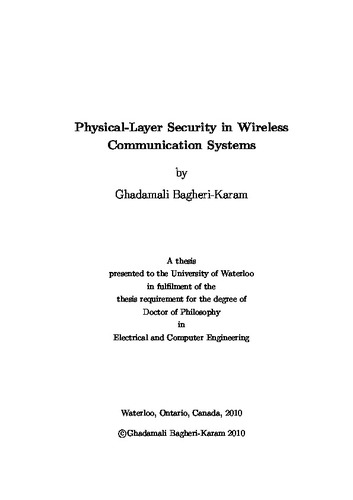 The use of wireless networks has grown significantly in contemporary times, and continues to develop further. The broadcast nature of wireless communications, however, makes them particularly vulnerable to eavesdropping. Unlike traditional solutions, which usually handle security at the application layer, the primary concern of this dissertation is to analyze and develop solutions based on coding techniques at the physical-layer. First, in chapter $2$, we consider a scenario where a source node wishes to broadcast two confidential messages to two receivers, while a wire-tapper also receives the transmitted signal. This model is motivated by wireless communications, where individual secure messages are broadcast over open media and can be received by any illegitimate receiver. The secrecy level is measured by the equivocation rate at the eavesdropper. We first study the general (non-degraded) broadcast channel with an eavesdropper, and present an inner bound on the secrecy capacity region for this model. This inner bound is based on a combination of random binning, and the Gelfand-Pinsker binning. We further study the situation in which the channels are degraded. For the degraded broadcast channel with an eavesdropper, we present the secrecy capacity region. Our achievable coding scheme is based on Cover's superposition scheme and random binning. We refer to this scheme as the Secret Superposition Scheme. Our converse proof is based on a combination of the converse proof of the conventional degraded broadcast channel and Csiszar Lemma. We then assume that the channels are Additive White Gaussian Noise and show that the Secret Superposition Scheme with Gaussian codebook is optimal. The converse proof is based on Costa's entropy power inequality. Finally, we use a broadcast strategy for the slowly fading wire-tap channel when only the eavesdropper's channel is fixed and known at the transmitter. We derive the optimum power allocation for the coding layers, which maximizes the total average rate. Second, in chapter $3$ , we consider the Multiple-Input-Multiple-Output (MIMO) scenario of a broadcast channel where a wiretapper also receives the transmitted signal via another MIMO channel. First, we assume that the channels are degraded and the wiretapper has the worst channel. We establish the capacity region of this scenario. Our achievability scheme is the Secret Superposition Coding. For the outerbound, we use notion of the enhanced channels to show that the secret superposition of Gaussian codes is optimal. We show that we only need to enhance the channels of the legitimate receivers, and the channel of the eavesdropper remains unchanged. We then extend the result of the degraded case to a non-degraded case. We show that the secret superposition of Gaussian codes, along with successive decoding, cannot work when the channels are not degraded. We develop a Secret Dirty Paper Coding scheme and show that it is optimal for this channel. We then present a corollary generalizing the capacity region of the two receivers case to the case of multiple receivers. Finally, we investigate a scenario which frequently occurs in the practice of wireless networks. In this scenario, the transmitter and the eavesdropper have multiple antennae, while both intended receivers have a single antenna (representing resource limited mobile units). We characterize the secrecy capacity region in terms of generalized eigenvalues of the receivers' channels and the eavesdropper's channel. We refer to this configuration as the MISOME case. We then present a corollary generalizing the results of the two receivers case to multiple receivers. In the high SNR regime, we show that the capacity region is a convex closure of rectangular regions. Finally, in chapter $4$, we consider a $K$-user secure Gaussian Multiple-Access-Channel with an external eavesdropper. We establish an achievable rate region for the secure discrete memoryless MAC. Thereafter, we prove the secrecy sum capacity of the degraded Gaussian MIMO MAC using Gaussian codebooks. For the non-degraded Gaussian MIMO MAC, we propose an algorithm inspired by the interference alignment technique to achieve the largest possible total Secure-Degrees-of-Freedom . When all the terminals are equipped with a single antenna, Gaussian codebooks have shown to be inefficient in providing a positive S-DoF. Instead, we propose a novel secure coding scheme to achieve a positive S-DoF in the single antenna MAC. This scheme converts the single-antenna system into a multiple-dimension system with fractional dimensions. The achievability scheme is based on the alignment of signals into a small sub-space at the eavesdropper, and the simultaneous separation of the signals at the intended receiver. We use tools from the field of Diophantine Approximation in number theory to analyze the probability of error in the coding scheme. We prove that the total S-DoF of $\frac{K-1}{K}$ can be achieved for almost all channel gains. For the other channel gains, we propose a multi-layer coding scheme to achieve a positive S-DoF. As a function of channel gains, therefore, the achievable S-DoF is discontinued.