Analyzing Residential Land Use Impacts along the Sheppard Subway Corridor 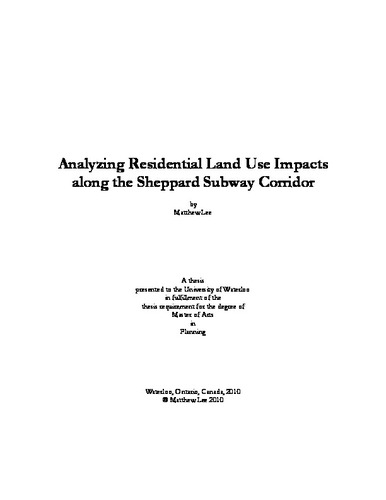 Urban economic theory states that transit improvements result in travel time savings and consequently warrant higher rents particularly with proximity to surrounding stations. This research uses the Sheppard subway corridor as a case study to test the established theories by measuring the changes to residential intensification and property values (1) as a function of time before and after the construction, and (2) as a function of distance to subway stations. Two metrics are established to observe residential intensification and property value: Dwelling Density and Value Density respectively. Dwelling Density is the number of dwellings contained in its property parcel divided by property area; Value Density is total property value of a given property parcel divided by its property area. Using obtained property sales data in four identified analysis years (1991, 1996, 2001, and 2006) and ArcGIS, spatial interpolation surfaces are generated to visualize the changes on a geographical plane through time. Dwelling and Value Density scatterplots are generated by extracting values from the interpolated surfaces and computing its distance to the nearest subway station and to major development nodes. The generated interpolated surfaces show a strong increase in Dwelling and Value Density in North York Centre which suggest that (1) planning policies succeeded in guiding residential growth, (2) a time lag is present of which the full benefits of rapid transit construction are realized, and (3) there may be positive network effects associated with the completion of the Sheppard subway. The scatterplot results demonstrated moderate change in Dwelling and Value Density at the Bayview station area and little change for the remaining stations (Bessarion, Don Mills, and Leslie) based on observations up to December 2006. The results warrant a degree of optimism about Sheppard subway’s ability to attract residential intensification and raise property values, especially given that data was analyzed only up to four years after the subway corridor began revenue service. It is recommended that a similar methodology be performed at a later date when the corridor’s ridership and surrounding development reaches maturity. A preliminary forecasting exercise determined that Dwelling and Value Density will rise, particularly surrounding stations that have since demonstrated little change in residential land use.