rePublic: Examining & reestablishing the public role of the city hall 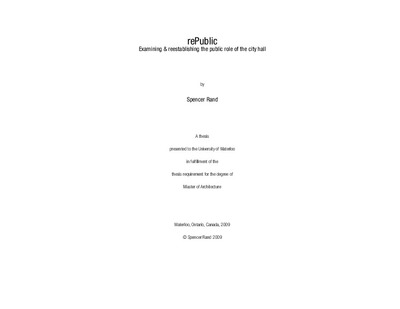 City halls have long been regarded as the social, organizational, perceptual and physical centers of cities. A successful city can be recognized by the success of its city hall. As a city develops, so must its city hall. Over several decades of construction, urban sprawl in Michigan has resulted in an increasingly contiguous network of cities. Devoid of distinction, the boundaries of these cities meld with each other, disintegrating developed city centers. City halls have furthered this disintegration by relocating municipal service buildings along the periphery of downtowns reducing accessibility to the services and involvement with the vitality of the downtown. The city hall is then left to contend with mid-rise commercial buildings for prominence and distinction or to simply become isolated amidst residential neighbors. In downtown Ann Arbor the 1964 city hall stands, exemplary of an era concerned with accommodating the conveniences of driving, economy of construction and the modernist style. Building upkeep, working conditions, accessibility of services and expansion cause problems today. This thesis recognizes the city hall as an intrinsic part of the development of downtowns for midsized cities. It looks at how a city such as Ann Arbor could further that development by relocating and transforming the city hall into a new, central, responsive, informative and integrated hub for administrative and social functions, worthy of pride. Devised in response to numerous observations made across the State, related studies and discussion with city officials, the project identifies eight major criteria to consider when designing a new city hall. An integration of community and social programs with those of the administrative departments of the city, draw the citizens to use the building regularly and become more actively involved with political issues. Success of this project might assert the city as a leader in inspiring others to evaluate the role of architecture in smart growth planning and urban densification.