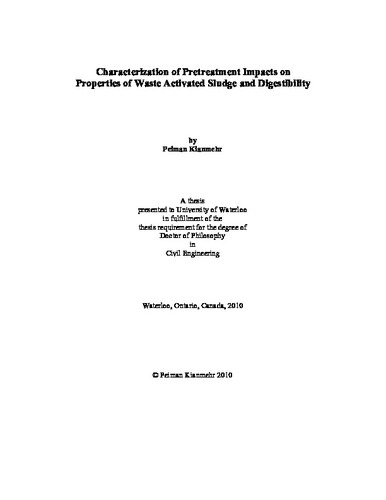 Technologies for pretreatment of waste activated sludges (WAS) prior to digestion are of increasing interest to wastewater treatment utilities because of their promise for improving sludge digestibility and reducing the mass of biosolids remaining after digestion. While there has been considerable study of pretreatment processes, a common approach to describing the impact of pretreatments on sludge biodegradability has not been developed. The overall objective of this study was to develop protocols that can be employed to characterize the impact of pretreatment processes on WAS digestion. Sonication and ozonation were employed as models of physical and chemical pretreatment technologies respectively. A range of physical, chemical and biological responses were evaluated to assess the impact of pretreatment on WAS properties as well as digestibility. WAS samples that were generated over a range of solids residence times (SRTs) under controlled operating conditions were employed to facilitate an assessment of the interaction between pretreatment and WAS properties on digestibility. The VS, COD and soluble TKN responses indicated that a significant fraction of the WAS solids were solublized by sonication and ozonation, however, it appeared that the types of materials which were solublized was affected by the SRT at which the WAS was generated and the level of pretreatment. The results indicated that the impact of pretreatment on biodegradability of WAS was not described by solublization values exclusively without considering the SRT of the sludge and the level and type of pretreatment. A higher level of proteinaceous materials was preferentially solublized as the result of pretreatment. Respirometry revealed that both sonication and ozonation substantially reduced the viable heterotrophs in the sludge and modestly increased the readily biodegradable fraction of COD. The ultimate yields of CH4 and NH4 in BMP tests and VFAs in BAP tests revealed that pretreatment marginally increased the ultimate digestibility of the sludges. Only a high dose of ozonation substantially increased the digestibility of the 15 day SRT sludge. However, both sonication and ozonation substantially increased the rate of hydrolysis which is typically the rate limiting process in WAS digestion. The BMP test was not a useful test to evaluate the rate of methane generation due to inhibition of methanogens in the early days of BMP test for pretreated sludges. The comparison between VFA and ammonia responses in day 10 of BAP test and ultimate values of these responses after 60 days in BMP test revealed linear relationships between these responses. According to these relationships, a set of models were introduced in this study. The models can be employed to predict the ultimate methane and ammonia generation using soluble COD, VFA or ammonia responses in day 10 of BAP tests. The BAP test was determined to be a shorter test (10 days) than the BMP (55 to 60 days) test and could provide information on the rates of hydrolysis and acidification/ammonification processes. Characterization of biodegradable and non-biodegradable material in WAS samples was conducted using a simplified ADM1 model. The characterization also revealed that proteins are a substantial fraction of biodegradable materials. The estimated ammonia, VFA and methane values from the stoichiometric model were similar to the corresponding values from the experiments. This supported the validity of the simplified model for all sludges employed in this study.