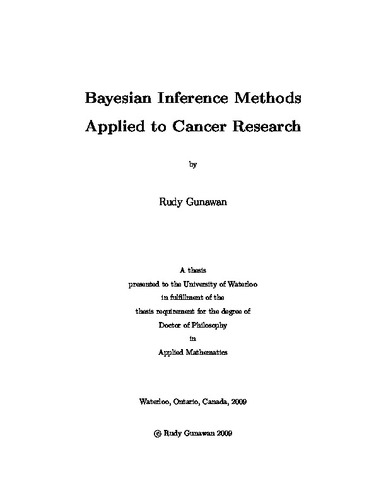 The purpose of this Thesis is to present a Bayesian analysis of oncological data sets with particular focus on cervical carcinomas and ovarian cancers. Bayesian methods of data analysis have a very long history, and have been used with great success in many disciplines, from Physics to Econometrics. Nonetheless, they remain very controversial among statisticians who belong to the orthodox - i.e, frequentist school, and are not well known by the medical community. To help in that direction, we reviewed in the introductory chapter the basic philosophical and practical differences between the two schools, and in the second chapter, we briefly reviewed the history of Bayesian methodology, from the early efforts of Thomas Bayes and of Pierre Simon de Laplace to the modern contributions of Harold Jeffreys, Richard Cox, and Edwin Jaynes. In many aspects of medical research, we deal with experimental data from which a certain proposition or hypothesis is validated. Unlike in physics, where we have strong and solid foundations such as Newton's law of motion, Snell's optical laws, Kirchoff's laws, Einstein's relativity theory, and many more, we do not have such privileges in medical research. Hence, many hypotheses are constantly tested as new evidence becomes available. One of the actively-researched medical areas is cancer research about which our understanding is still in its infancy. Numerous experiments (both in vivo and in vitro) and clinical trials have been conducted to further our knowledge; thus, Bayesian methodology finds its place to aid us in obtaining scientific inferences about certain propositions or hypotheses from available data and resources. In this work, we use data given to us by our medical collaborators at the Princess Margaret Hospital (PMH) in Toronto to carry out two main projects: Firstly, to make an inference about the oxygenation status (oxygen partial pressure, pO$_2$) within human cervical carcinomas and secondly, an inference about the effectiveness of various molecularly-targeted agents (MTAs) in phase II clinical trials of relapsed ovarian cancer patients. In the first problem, we address the challenges of tumor hypoxia - a state of oxygen deprivation in tumors. Currently, there are two methods to obtain tumor oxygen status, namely the direct Eppendorf needle electrode and the indirect immunohistochemical assay of a protein marker, Carbonic Anhydrase IX (CAIX). In this project, we introduce Bayesian probability theory to obtain inferences about tumor oxygenation from each technique and the concordance between the two techniques. From this study, we conclude that under certain conditions, two biopsies are sufficient to infer the tumor oxygenation level based on the immunohistochemical assays of CAIX. Additionally, there is a fair concordance between the direct and the indirect measurements of tumor oxygenation. In the latter problem, ovarian cancer is the topic of study. Ovarian cancer has the highest mortality rate among gynecological cancers and one that is known to relapse. CA-125 is still the most inexpensive biomarker for monitoring ovarian cancers. From the phase II clinical trial data, we demonstrate the survival advantage of CA-125 responsive group of patients by means of a non-parametric Kaplan-Meier statistic.