Sensory information to motor cortices: Effects of motor execution in the upper-limb contralateral to sensory input. 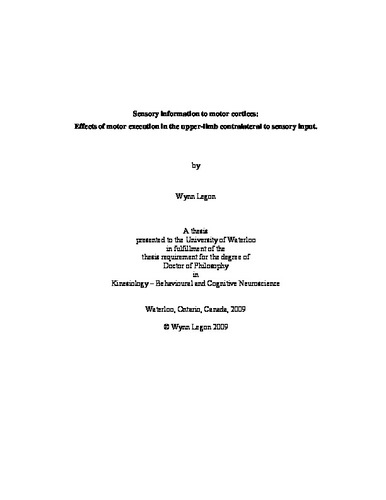 Performance of efficient and precise motor output requires proper planning of movement parameters as well as integration of sensory feedback. Peripheral sensory information is projected not only to parietal somatosensory areas but also to cortical motor areas, particularly the supplementary motor area (SMA). These afferent sensory pathways to the frontal cortices are likely involved in the integration of sensory information for assistance in motor program planning and execution. It is not well understood how and where sensory information from the limb contralateral to motor output is modulated, but the SMA is a potential cortical source as it is active both before and during motor output and is particularly involved in movements that require coordination and bilateral upper-limb selection and use. A promising physiological index of sensory inflow to the SMA is the frontal N30 component of the median nerve (MN) somatosensory-evoked potential (SEP), which is generated in the SMA. The SMA has strong connections with ipsilateral areas 2, 5 and secondary somatosensory cortex (S2) as well as ipsilateral primary motor cortex (M1). As such, the SMA proves a fruitful candidate to assess how sensory information is modulated across the upper-limbs during the various stages of motor output. This thesis inquires into how somatosensory information is modulated in both the SMA and primary somatosensory cortical areas (S1) during the planning and execution of a motor output contralateral to sensory input across the upper-limbs, and further, how and what effect ipsilateral primary motor cortex (iM1) has upon modulation of sensory inputs to the SMA.