With Them And Against Them: Canada's Relations With Nicaragua, 1979-1990 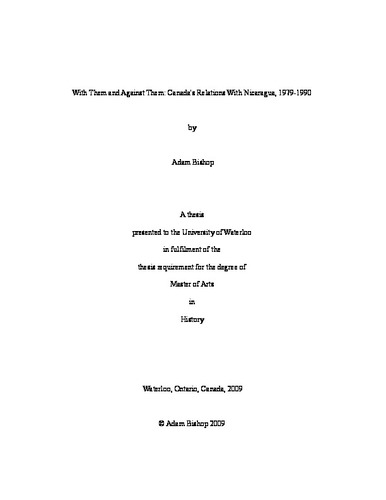 Canada's relations with Nicaragua changed greatly during the 1980s after the Sandinista National Liberation Front (FSLN) came to power in a revolution which overthrew the Somoza dynasty. For the first few years of the new regime in Nicaragua, Canada provided little support, declaring that Canadians had no significant interests in the country and there was no reason for them to get involved in Central America's ongoing conflicts. When Brian Mulroney first came to power with Joe Clark as his Secretary of State for External Affairs, the Progressive Conservatives generally held to the course set by the previous Liberal government. However, as the 1980s went on the Conservatives began providing Nicaragua with more bilateral aid, and became increasingly involved in the regional peace process known as Esquipulas; this culminated in Canadian peacekeepers entering the region in 1990 as part of a UN peacekeeping force. The major impetus for the government's change in attitude was the strong and consistent pressure placed on the government by the Canadian public. Aid raised privately by Canadians for Nicaragua overshadowed government aid for much of the decade, making the government response look weak. The support of the Canadian public for action in Central America was the major factor which pressured the federal government into becoming more involved in Nicaragua, even though the government was not as supportive of the new regime in Nicaragua as a large portion of the Canadian public often was.