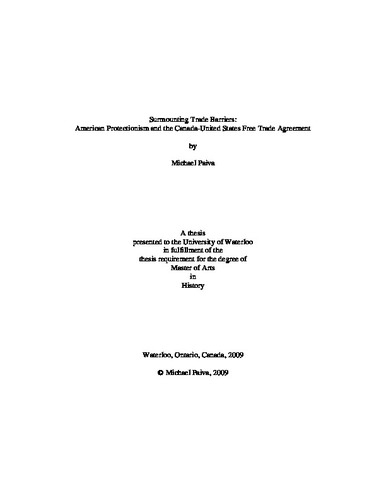 This thesis examines US protectionism in the 1980s from Canadian and American perspectives, and its role in Canada’s pursuit of the historic 1988 Canada-US Free Trade Agreement. It analyzes the perceived “threat” of protectionism and evaluates the agreement’s provisions against Canada’s goal of securing access to the US market. It contends that US protectionism was crucial in the Mulroney government’s decision to negotiate a bilateral agreement and was a contentious issue for the agreement’s critics. US sources, unexamined in existing historiography, confirm the increased threat of American protectionism, but emphasize a distinction between the threat and implementation of protectionist trade law. Although the agreement did not shield Canada from US trade remedies, Canada gained important presence in the trade dispute process. These conclusions are drawn from Canadian and American media and government documents, 1980s academic and think-tank commentary, legal documents, the memoirs and diaries of major players, and select archival sources.