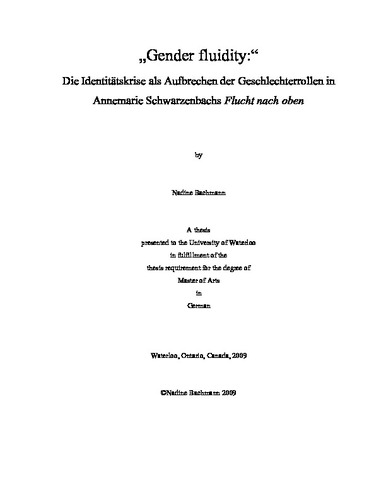 The Swiss author Annemarie Schwarzenbach created literary figures that resist being classified according to a gender binary and heterosexual norm. She thereby, already in the 1930s, imagined something akin to the recent investigative work by Lisa Diamond on gender and sexual fluidity. Schwarzenbach's texts are populated by feminine men and masculine women, a genderswitching that can be interpreted as breaking apart the categories of gender and sexuality. In her novel Flucht nach oben (1933), in which the dichotomy of male and female is proven invalid, gender role models become obsolete, leading to the protagonist's deep uncertainty about his identity. Schwarzenbach’s characters can thus be called “multi–sexual” as they meld both genders as well as homo– and hetero–sexual orientations, thereby exceeding culturally fixed borders. The dichotomy between male and female becomes ever more instable, just as the labels hetero–, homo– and bisexual fall apart. In the end of the novel, the main protagonist forms a queer family together with other characters who do not fit into cultural gender norms. In contrast to earlier studies which interpret Schwarzenbach's texts biographically, I seek to use Diamond’s contemporary model indebted to queer studies. I involve, moreover, theories by Joan Rivière, René Girard, Eve Sedgwick, and Judith Butler. In addition, Flucht nach oben is read alongside Schwarzenbach's other novels – Freunde um Bernhard (1931), Lyrische Novelle (1933) and Eine Frau zu sehen (1929). These works serve as intertexts that contribute to a deeper understanding of the recurring character types and constellations of relationships in Schwarzenbach’s oeuvre.