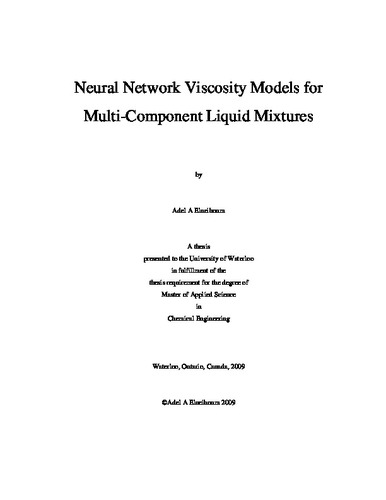 An artificial neural network has been developed for the prediction of the kinematic viscosity of ternary, quaternary, and quinary systems. The systems investigated consisted of the following components: Heptane, Octane, Toluene, Cyclohexane, and Ethylbenzene at atmospheric pressure and temperatures of 293.15, 298.15, 308.15, and 313.15 K. The developed model was based on a three-layer neural network with six neurons in the hidden layer and a back propagation learning algorithm. The neural network was trained with binary systems consisting of 440 data sets and using mole fractions combined with temperature as the input. A comparison of the experimental values and the results predicted from the neural network revealed a satisfactory correlation, with the overall absolute average deviation (AAD) for the ternary, quaternary, and quinary systems of 0.8646%, 1.1298%, and 4.3611%, respectively. The results were further compared to the generalized McAllister model as an alternative empirical model. The neural network produced better results than the generalized McAllister model. The new approach established in this work helps reduce the amount of experimental work required in order to determine most of the parameters needed for other models and illustrates the potential of using a neural network method to estimate the kinematic viscosity of many other mixtures.