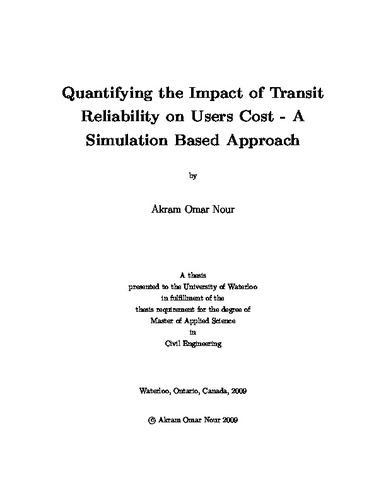 The role of public transportation increases as travel demand increases due to the growth in population and economics. The importance of providing a balanced public transportation has increased. In Ontario, Canada, the provincial government investing more than $17B in transit projects by the year of 2020 [28]. Consequently, planners and engineers motivated to pay more attention to mode split (mode choice) models used to estimate transit ridership. In most existing mode choice models, the likelihood of a trip maker using a transit mode (e.g. transit) is based on the generalized cost (GC) of using transit mode relative to the generalized cost of all other available modes. In conventional generalized cost formulations, transit costs are considered deterministic. It is quite evident, however, that great variability exists in the reliability of transit service and, as a result, the actual costs experienced by users. Efforts are ongoing to incorporate the costs of reliability in mode choice models by extending formulations to include penalties for arriving prior to or later than a desired arrival time. Transit operators strive to provide reliable service to retain and attract more users. Unreliable service can adversely affect the user by arriving late or early at their destination, waiting longer at their boarding station, and spending more time than expected in the transit vehicle. Unreliable service will also increase the user's anxiety associated with the uncertainty and discomfort. All these factors should be considered explicitly within the generalized cost (GC) function in order to accurately capture the GC of transit service relative to other modes and to ensure that these factors are not incorporated within the mode specific constant. In this study, a GC model is developed that explicitly represents service reliability. Service reliability is represented in the model as penalties associated with passengers' late arrival, early arrival, departure time shifting, waiting time, and anxiety. Furthermore, a methodology of utilizing field data to capture service reliability is defined. A Monte-Carlo simulation framework has been developed using the proposed GC function to quantify the impact of transit reliability on transit user cost. The proposed framework was applied on the iXpress service in the Regional of Waterloo in Ontario, Canada, utilizing Automated Vehicle Location (AVL) system data from the Regional Municipality of Waterloo to estimate service reliability. All the coefficients included in the proposed GC are assumed based on the relative importance of each penalty to scheduled in vehicle time by considering different passenger classes. In this research, the transit passengers are assumed to belong to one of three passenger classes based on their risk tolerance. From the results, it was found that increasing reliability of arrivals at a station can decrease transit users generalized costs significantly. We further posit that including uncertainty in the calculation of generalized costs may provide better estimates for mode split in travel forecasting models.