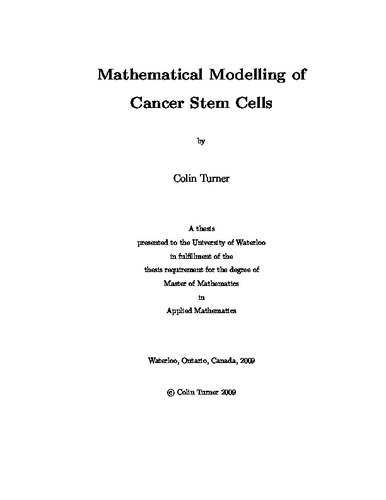 The traditional view of cancer asserts that a malignant tumour is composed of a population of cells, all of which share the ability to divide without limit. Within the last decade, however, this notion has lost ground to the emerging cancer stem cell hypothesis, which counters that only a (typically small) sub-population of so-called `cancer stem cells' has the capacity to proliferate indefinitely, and hence to drive and maintain tumour growth. Cancer stem cells have been putatively identified in leukemias and, more recently, in a variety of solid tumours including those of the breast and brain. The cancer stem cell hypothesis helps to explain certain clinically-observed phenomena, including the apparent inability of conventional anti-cancer therapies to eradicate the disease despite (transient) reduction of overall tumour bulk -- presumably these treatments fail to kill the underlying cancer stem cells. Herein, we develop stochastic and deterministic temporal models of tumour growth based on the cancer stem cell hypothesis, and apply these models to discussions of the treatment of glioblastoma multiforme, a common type of brain cancer believed to be maintained by cancer stem cells, and to the phenomenon of the epithelial-mesenchymal transition, a process thought to be important in generating cancer cells capable of metastasis.