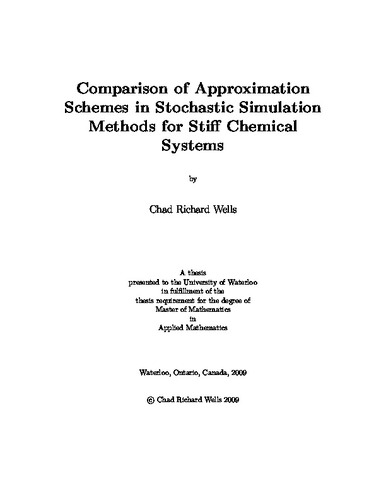 Interest in stochastic simulations of chemical systems is growing. One of the aspects of simulation of chemical systems that has been the prime focus over the past few years is accelerated simulation methods applicable when there is a separation of time scale. With so many new methods being developed we have decided to look at four methods that we consider to be the main foundation for this research area. The four methods that will be the focus of this thesis are: the slow scale stochastic simulation algorithm, the quasi steady state assumption applied to the stochastic simulation algorithm, the nested stochastic simulation algorithm and the implicit tau leaping method. These four methods are designed to deal with stiff chemical systems so that the computational time is decreased from that of the "gold standard" Gillespie algorithm, the stochastic simulation algorithm. These approximation methods will be tested against a variety of sti examples such as: a fast reversible dimerization, a network of isomerizations, a fast species acting as a catalyst, an oscillatory system and a bistable system. Also, these methods will be tested against examples that are marginally stiff, where the time scale separation is not that distinct. From the results of testing stiff examples, the slow scale SSA was typically the best approximation method to use. The slow scale SSA was highly accurate and extremely fast in comparison with the other methods. We also found for certain cases, where the time scale separation was not as distinct, that the nested SSA was the best approximation method to use.