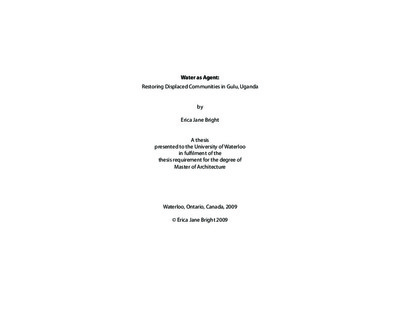 Disasters due to war and conflict or natural forces are responsible for the 26 million people displaced across the world today. The crisis extends into the temporary, yet indefinite, displacement camps where people live in congested living arrangements, vulnerable to an increased risk of disease, death, and social violence (spousal abuse, rape). Even when chaos subsides, social and physical networks have frayed rendering the temporary displacement camp a permanent home for some. Often, despite this “permanence”, access to adequate services and infrastructure and hence social and economic growth remains in a state of emergency. This thesis proposes that water infrastructure is the key social catalyst for developing these displacement camps into permanent sustainable communities. An urban displacement camp in the town of Gulu, Northern Uganda, is the case study location for a speculative design intervention. During rebel activities from 1996 to 2004, the town of Gulu more than tripled in size, absorbing almost 100,000 displaced people forced to flee their land. These people settled in displacement camps next to, and within the wetlands that border the town on all sides. The urban metabolism of the town has become polluted as the displaced people use, alter and degrade the wetlands because they have no other alternatives. Following the instigation of a peace process in 2006, some people have begun the journey home. However, it is estimated that just over half of these people will continue to live in the squalid camps, without an opportunity to prosper. A strategy is proposed for addressing and subsequently re-defining this urban metabolism. By synthesizing the existing urban fabric with strategies for harnessing the natural landscape, varying scales of water infrastructure are proposed. New opportunities for agricultural production is supported, while the spatial relationships created by the physical structuring of the water infrastructure renews the influence that water collection and distribution has in creating the social locus of a community.