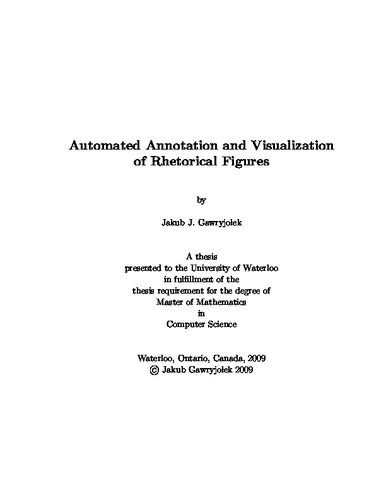 Linguistic annotation provides additional information asserted with a particular purpose in a document or other piece of information. It is widely used in various fields, from computing and bioinformatics, through imaging, to law and linguistics. There is also a clear distinction between what is communicated through the written/spoken natural language and how this is passed on. A new problem of linguistic annotation is the annotation of classical rhetorical figures --- patterns of text in which a characteristic syntactic form modifies the standard meanings of words, and leads to a change or an extension of meaning. Rhetoric studies the effectiveness of language comprehensively, including its emotional impact, as much as its propositional content. The annotation of rhetorical figures is therefore important not only for the linguistic point of view, but also for discovering different styles of writing, purpose and effect of written documents, and for better natural language understanding in general. The purpose of this thesis is the automated annotation of rhetorical figures. In the thesis we primarily focus on the figures of repetition, which include the repetition of words, phrases, and clauses. Additionally, we also describe the work we have done on the detection and annotation of figures of parallelism, as well as those that pertain more to the semantics than to the syntax, or positioning. We have developed a rhetorical figure annotation tool dubbed JANTOR (Java ANnotation Tool Of Rhetoric), which enables manual and automated annotation of files in HTML format. We have applied a lexicalized probabilistic context-free grammar parser for the recognition of the figures of repetition. We also describe a simple parse tree distance used for calculating the difference between similarly structured phrases, which is necessary for the recognition of some of the figures of parallelism. Moreover, we have applied the semantic relationships contained in the WordNet lexical database and extended Porter stemmer algorithm for finding derivationally related words. Finally, we present a method for finding pairs of words which are ordinarily contradictory, which is crucial for detecting the interesting figure of speech: oxymoron. For this purpose typed dependency grammars together with WordNet are used. The experiments we have conducted on the detection of selected subset of rhetorical figures have yielded very promising results. Lastly, we present the visualization of the occurrences of the figures and comparison between 14 American presidents' inaugural addresses including the most recent one by President Barack Obama. The provocative results of this comparison show that a) automated analysis of meaningful rhetorical information is possible and tractable, and b) help us with understanding what creates a successful orator.