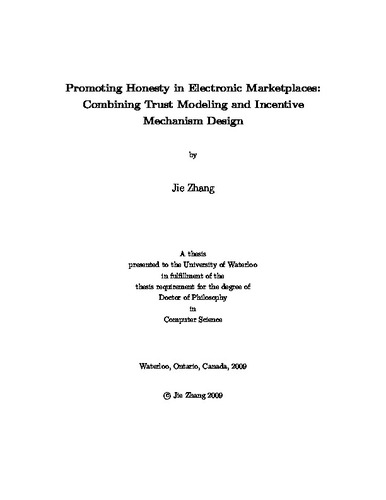 This thesis work is in the area of modeling trust in multi-agent systems, systems of software agents designed to act on behalf of users (buyers and sellers), in applications such as e-commerce. The focus is on developing an approach for buyers to model the trustworthiness of sellers in order to make effective decisions about which sellers to select for business. One challenge is the problem of unfair ratings, which arises when modeling the trust of sellers relies on ratings provided by other buyers (called advisors). Existing approaches for coping with this problem fail in scenarios where the majority of advisors are dishonest, buyers do not have much personal experience with sellers, advisors try to flood the trust modeling system with unfair ratings, and sellers vary their behavior widely. We propose a novel personalized approach for effectively modeling trustworthiness of advisors, allowing a buyer to 1) model the private reputation of an advisor based on their ratings for commonly rated sellers 2) model the public reputation of the advisor based on all ratings for the sellers ever rated by that agent 3) flexibly weight the private and public reputation into one combined measure of the trustworthiness of the advisor. Our approach tracks ratings provided according to their time windows and limits the ratings accepted, in order to cope with advisors flooding the system and to deal with changes in agents' behavior. Experimental evidence demonstrates that our model outperforms other models in detecting dishonest advisors and is able to assist buyers to gain the largest profit when doing business with sellers. Equipped with this richer method for modeling trustworthiness of advisors, we then embed this reasoning into a novel trust-based incentive mechanism to encourage agents to be honest. In this mechanism, buyers select the most trustworthy advisors as their neighbors from which they can ask advice about sellers, forming a social network. In contrast with other researchers, we also have sellers model the reputation of buyers. Sellers will offer better rewards to satisfy buyers that are well respected in the social network, in order to build their own reputation. We provide precise formulae used by sellers when reasoning about immediate and future profit to determine their bidding behavior and the rewards to buyers, and emphasize the importance for buyers to adopt a strategy to limit the number of sellers that are considered for each good to be purchased. We theoretically prove that our mechanism promotes honesty from buyers in reporting seller ratings, and honesty from sellers in delivering products as promised. We also provide a series of experimental results in a simulated dynamic environment where agents may be arriving and departing. This provides a stronger defense of the mechanism as one that is robust to important conditions in the marketplace. Our experiments clearly show the gains in profit enjoyed by both honest sellers and honest buyers when our mechanism is introduced and our proposed strategies are followed. In general, our research will serve to promote honesty amongst buyers and sellers in e-marketplaces. Our particular proposal of allowing sellers to model buyers opens a new direction in trust modeling research. The novel direction of designing an incentive mechanism based on trust modeling and using this mechanism to further help trust modeling by diminishing the problem of unfair ratings will hope to bridge researchers in the areas of trust modeling and mechanism design.