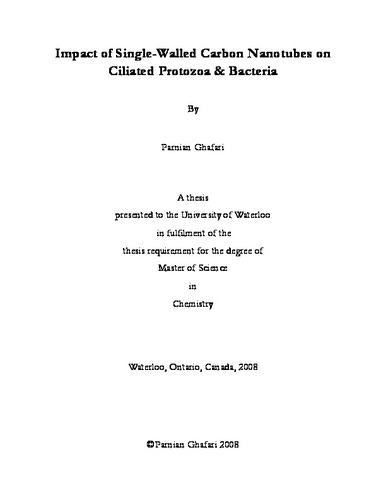 As pointed out more and more frequently in the literature, there is a pressing need for research into the health and environmental impact of nanoparticles. This work represents a joint effort between scientists in nanotechnology, chemistry and biology to answer this call and to investigate the environmental effects of carbon nantoubes (CNTs) from a brand new aspect. The results showed clearly the dose-dependent effects of single-walled carbon nanotubes (SWNTs) on the ingestion and digestion of bacteria by Tetrahymena thermophila, a ciliated protozoan, propagated to its prey bacteria, Escherichia coli. Investigated by confocal microscopy Tetrahymena were able to internalize large quantities of SWNTs and then excrete SWNTs and undigested bacteria in aggregates. Inhibition of ciliate bacterivory measured by Ciliate Bacterivory assay was evident at far below lethal concentrations. At high tube concentrations (above 6.8 μg∙ml-1), cell viability was affected. In addition, explored by fluorescence microscopy and scanning electron microscopy, SWNTs stimulated Tetrahymena to abnormally egest viable bacteria inside membrane protected structures, which enhanced bacterial survival during antimicrobial treatments, bacteriostatic or bacteriocidal. This phenomenon may have important implications to public health. In general, research on toxicity of nanoparticles is in a very early stage with most studies on direct fatality (kill or not to kill) of a single organism or certain type of cells. This work is believed to be among the first few investigating extrapolated effects. Hopefully, this wok will stimulate a line of research towards better understanding of the effects of nanomaterials on diverse organisms, and stimulate not only toxicology but also ecotoxicology studies.