Poincare Waves and Kelvin Waves in a Circular Lake 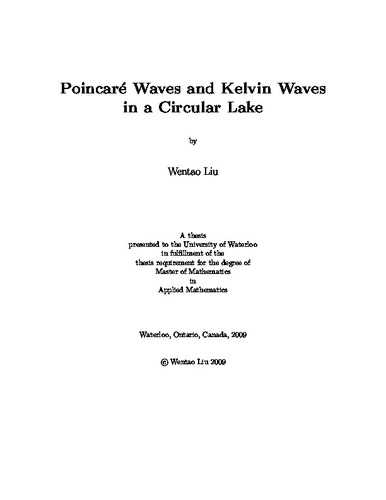 When wind blows over a stratified lake an interface tilt is often generated, and internal waves usually appear after the wind stops. Internal waves in lakes are studied in many literatures, but most assume a hydrostatic pressure balance. In this thesis we discuss the internal Poincare waves and Kelvin waves in a rotating, continuously stratified, flat-bottom, circular lake with fully nonlinear and non-hydrostatic effects. An analytical solution is derived for the linearized system and it provides initial conditions used in the MIT General Circulation Model (MITgcm). This model is chosen due to its non-hydrostatic capability. Both Poincare waves and Kelvin waves are considered. The analytical solution of the linear system is verified numerically when the wave amplitude is small. As the wave amplitude increases the waves become more nonlinear. Poincare waves steepen and generate solitary-like waves with shorter wavelengths, but most of the energy contained in these waves is transferred back and forth between the parent wave and the solitary-like waves. Kelvin waves, on the other hand, steepen and lose their energy to solitary-like waves. The appearance of the solitary-like waves is not absolutely clear and higher resolution is required to clear up the details of this process. This conclusion agrees with de la Fuente et al (2008) who discussed the internal waves in a two-layer model. Moreover, in the Kelvin waves case, unexpected small waves are generated at the side boundaries and travel inwards. The wave amplitude and wavelength of these spurious waves become smaller as the horizontal resolution increases. One possible reason to explain these waves is the use of square grids to approximate the circular lake.