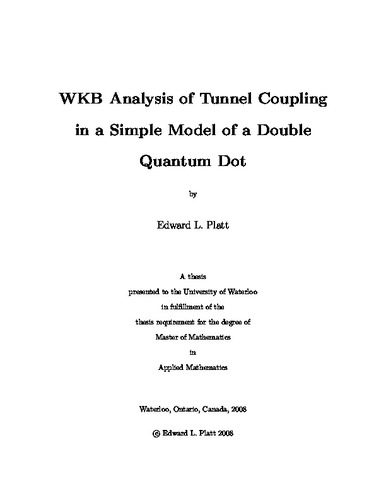 A simplified model of a double quantum dot is presented and analyzed, with applications to spin-qubit quantum computation. The ability to trap single electrons in semiconductor nanostructures has led to the proposal of quantum computers with spin-based qubits coupled by the exchange interaction. Current theory predicts an exchange interaction with a -1 power-law dependence on the detuning ϵ, the energy offset between the two dots. However, experiment has shown a -3/2 power-law dependence on ϵ. Using WKB analysis, this thesis explores one possible source of the modified dependence, namely an ϵ-dependent tunnel coupling between the two wells. WKB quantization is used to find expressions for the tunnel coupling of a one-dimensional double-well, and these results are compared to the exact, numerical solutions, as determined by the finite difference method and the transfer matrix method. Small ϵ-dependent corrections to the tunnel coupling are observed. In typical cases, WKB correctly predicts a constant tunnel coupling at leading-order. WKB also predicts small ϵ-dependent corrections for typical cases and strongly ϵ-dependent tunnel couplings for certain exceptional cases. However, numerical simulations suggest that WKB is not accurate enough to analyze the small corrections, and is not valid in the exceptional cases. Deviations from the conventional form of the low-energy Hamiltonian for a double-well are also observed and discussed.