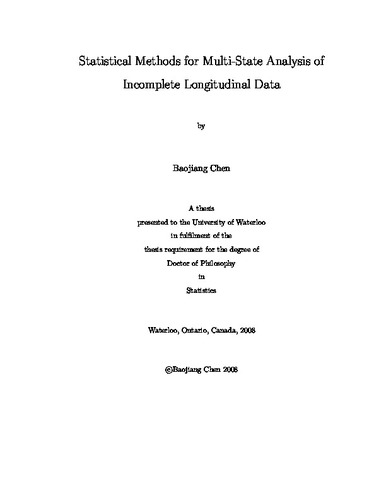 Analyses of longitudinal categorical data are typically based on semiparametric models in which covariate effects are expressed on marginal probabilities and estimation is carried out based on generalized estimating equations (GEE). Methods based on GEE are motivated in part by the lack of tractable models for clustered categorical data. However such marginal methods may not yield fully efficient estimates, nor consistent estimates when missing data are present. In the first part of the thesis I develop a Markov model for the analysis of longitudinal categorical data which facilitates modeling marginal and conditional structures. A likelihood formulation is employed for inference, so the resulting estimators enjoy properties such as optimal efficiency and consistency, and remain consistent when data are missing at random. Simulation studies demonstrate that the proposed method performs well under a variety of situations. Application to data from a smoking prevention study illustrates the utility of the model and interpretation of covariate effects. Incomplete data often arise in many areas of research in practice. This phenomenon is common in longitudinal data on disease history of subjects. Progressive models provide a convenient framework for characterizing disease processes which arise, for example, when the state represents the degree of the irreversible damage incurred by the subject. Problems arise if the mechanism leading to the missing data is related to the response process. A naive analysis might lead to biased results and invalid inferences. The second part of this thesis begins with an investigation of progressive multi-state models for longitudinal studies with incomplete observations. Maximum likelihood estimation is carried out based on an EM algorithm, and variance estimation is provided using Louis method. In general, the maximum likelihood estimates are valid when the missing data mechanism is missing completely at random or missing at random. Here we provide likelihood based method in that the parameters are identifiable no matter what the missing data mechanism. Simulation studies demonstrate that the proposed method works well under a variety of situations. In practice, we often face data with missing values in both the response and the covariates, and sometimes there is some association between the missingness of the response and the covariate. The proper analysis of this type of data requires taking this correlation into consideration. The impact of attrition in longitudinal studies depends on the correlation between the missing response and missing covariate. Ignoring such correlation can bias the statistical inference. We have studied the proper method that incorporates the association between the missingness of the response and missing covariate through the use of inverse probability weighted generalized estimating equations. The simulation illustrates that the proposed method yields a consistent estimator, while the method that ignores the association yields an inconsistent estimator. Many analyses for longitudinal incomplete data focus on studying the impact of covariates on the mean responses. However, little attention has been directed to address the impact of missing covariates on the association parameters in clustered longitudinal studies. The last part of this thesis mainly addresses this problem. Weighted first and second order estimating equations are constructed to obtain consistent estimates of mean and association parameters.