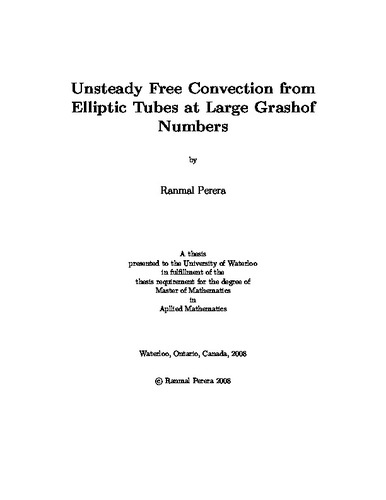 This study solves the problem of unsteady free convection from an inclined heated tube both numerically and analytically. The tube is taken to have an elliptic cross-section having a constant heat flux applied to its surface. The surrounding fluid is viscous and incompressible and infinite in extent. The Boussinesq approximation is used to describe the buoyancy force driving the flow. The underlying assumptions made in this work are that the flow remains laminar and two-dimensional for all time. This enables the Navier-Stokes and energy equations to be formulated in terms of the streamfunction, and vorticity. We assume that initially an impulsive heat flux is applied to the surface and that both the tube and surrounding fluid have the same initial temperature. The problem is solved subject to the no-slip and constant heat flux conditions on the surface together with quiescent far-field and initial conditions. An approximate analytical-numerical solution was derived for small times, t and large Grashof numbers, Gr. This was done by expanding the flow variables in a double series in terms of two small parameters and reduces to solving a set of differential equations. The first few terms were solved exactly while the higher-order terms were determined numerically. Flow characteristics presented include average surface temperature plots as well as surface vorticity and surface temperature distributions. The results demonstrate that the approximate analytical-numerical solution is in good agreement with the fully numerical solution for small t and large Gr.