Establishing the Construct of Boredom as Distinct From Apathy, Anhedonia and Depression 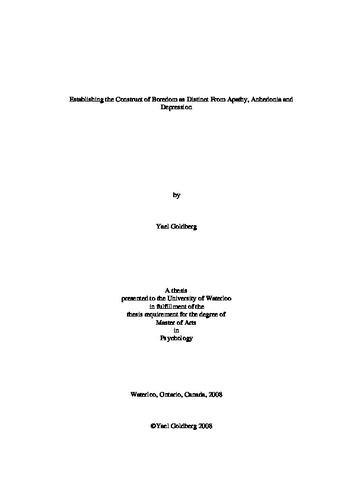 Boredom is a common human experience that has received little attention in the literature. To date, researchers have been unable to agree on a unified theory and definition of the construct. The present study investigated the nature of boredom by exploring its relationship to three phenomenologically similar affective states, namely apathy, anhedonia and depression. Structural equation modeling revealed that although related to apathy, anhedonia and depression to varying degrees, boredom is an empirically distinct construct. Establishing boredom as an independent construct provides an important first step in bringing the field closer to a universally accepted definition of boredom, which will undoubtedly facilitate more effective assessment and treatment of the experience of boredom, particularly in individuals with psychopathological and neuropathological illnesses in which boredom is a pervasive symptom.

Yael Goldberg (2008). Establishing the Construct of Boredom as Distinct From Apathy, Anhedonia and Depression. UWSpace. http://hdl.handle.net/10012/3911