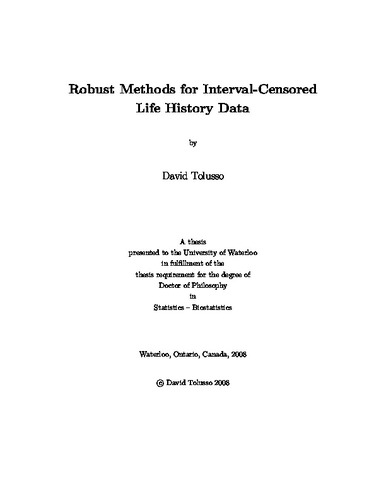 Interval censoring arises frequently in life history data, as individuals are often only observed at a sequence of assessment times. This leads to a situation where we do not know when an event of interest occurs, only that it occurred somewhere between two assessment times. Here, the focus will be on methods of estimation for recurrent event data, current status data, and multistate data, subject to interval censoring. With recurrent event data, the focus is often on estimating the rate and mean functions. Nonparametric estimates are readily available, but are not smooth. Methods based on local likelihood and the assumption of a Poisson process are developed to obtain smooth estimates of the rate and mean functions without specifying a parametric form. Covariates and extra-Poisson variation are accommodated by using a pseudo-profile local likelihood. The methods are assessed by simulations and applied to a number of datasets, including data from a psoriatic arthritis clinic. Current status data is an extreme form of interval censoring that occurs when each individual is observed at only one assessment time. If current status data arise in clusters, this must be taken into account in order to obtain valid conclusions. Copulas offer a convenient framework for modelling the association separately from the margins. Estimating equations are developed for estimating marginal parameters as well as association parameters. Efficiency and robustness to the choice of copula are examined for first and second order estimating equations. The methods are applied to data from an orthopedic surgery study as well as data on joint damage in psoriatic arthritis. Multistate models can be used to characterize the progression of a disease as individuals move through different states. Considerable attention is given to a three-state model to characterize the development of a back condition known as spondylitis in psoriatic arthritis, along with the associated risk of mortality. Robust estimates of the state occupancy probabilities are derived based on a difference in distribution functions of the entry times. A five-state model which differentiates between left-side and right-side spondylitis is also considered, which allows us to characterize what effect spondylitis on one side of the body has on the development of spondylitis on the other side. Covariate effects are considered through multiplicative time homogeneous Markov models. The robust state occupancy probabilities are also applied to data on CMV infection in patients with HIV.