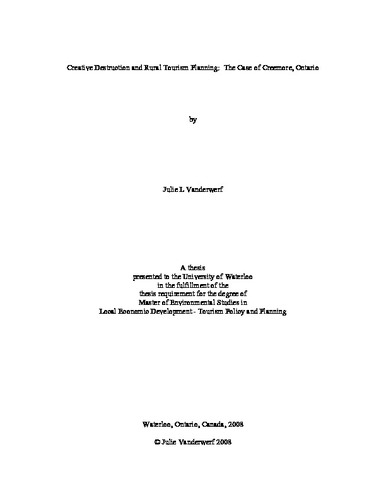 This study assesses the relationship between planning and creative destruction in the village of Creemore, Ontario. The study has four objectives. The first is to describe the evolution of tourism in Creemore by tracking change in three variables: investment, visitor numbers and resident attitudes. Second, is to describe past and present tourism planning in the village. Third, is to assess Creemore’s position in the model of creative destruction, based on information presented in objectives one and two. The final objective is to provide recommendations for Creemore’s future based on information gained from the other objectives. To investigate the first objective, entrepreneurial investment was provided by secondary sources, including the Creemore Business Improvement Association (BIA). Visitor numbers were obtained from content analyses of copies of the local newspaper and from information provided by the Creemore Springs Brewery. Resident attitudes were gleaned from a survey completed by 126 residents of Creemore. To meet the second objective, a content analysis was completed on historic issues of the local newspaper and six key informant interviews were conducted. Based on the information provided from the first two objectives, it is concluded that Creemore is in the second stage of Mitchell’s (1998) model of creative destruction, Advanced Commodification. This conclusion is drawn since visitor numbers and investment levels are still low and resident attitudes are generally positive towards tourism. It is also concluded that tourism planning plays a large role in creative destruction, as it can speed up, or slow down, the process, depending on the types of planning that are implemented. Based on the findings of this study, it is recommended that a tourism plan be developed to help mitigate possible future negative impacts of tourism, and to ensure the village does not evolve any further along the path of creative destruction.