Examination of the Belief Bias Effect across Two Domains of Reasoning 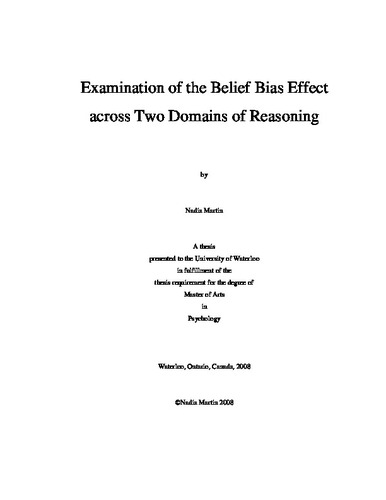 The belief bias effect – the finding that prior beliefs influence judgments of logic and evidence – has been a topic of much empirical investigation in both deductive and causal reasoning. However, to date, no research has examined the degree to which such biases are the result of common or distinct mechanisms in these two domains. By using common scales of measurement, I examine the degree to which individuals show common biases in these two domains in two experiments. Surprisingly, although the belief bias effect was observed in both paradigms, biases in one domain were unreliably associated with biases in the other domain. Experiment 2 included 6 measures of individual differences in an attempt to uncover the observation of differential biases in these domains. Dogmatism was found to be the single most predictive measure of belief bias, but only in deductive reasoning. These data are discussed in terms of dual process theories of reasoning.