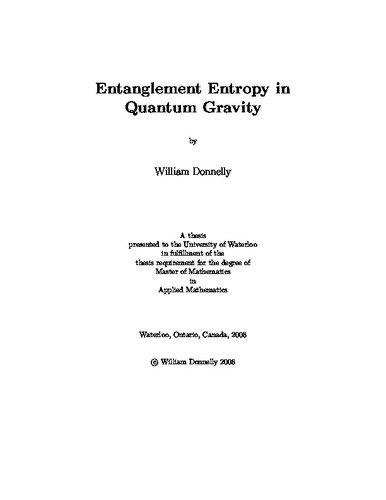 We study a proposed statistical explanation for the Bekenstein-Hawking entropy of a black hole in which entropy arises quantum-mechanically as a result of entanglement. Arguments for the identification of black hole entropy with entanglement entropy are reviewed in the framework of quantum field theory, emphasizing the role of renormalization and the need for a physical short-distance cutoff. Our main novel contribution is a calculation of entanglement entropy in loop quantum gravity. The kinematical Hilbert space and spin network states are introduced, and the entanglement entropy of these states is calculated using methods from quantum information theory. The entanglement entropy is compared with the density of states previously computed for isolated horizons in loop quantum gravity, and the two are found to agree up to a topological term. We investigate a conjecture due to Sorkin that the entanglement entropy must be a monotonically increasing function of time under the assumption of causality. For a system described by a finite-dimensional Hilbert space, the conjecture is found to be trivial, and for a system described by an infinite-dimensional Hilbert space a counterexample is provided. For quantum states with Euclidean symmetry, the area scaling of the entanglement entropy is shown to be equivalent to the strong additivity condition on the entropy. The strong additivity condition is naturally interpreted in information-theoretic terms as a continuous analog of the Markov property for a classical random variable. We explicitly construct states of a quantum field theory on the one-dimensional real line in which the area law is exactly satisfied.