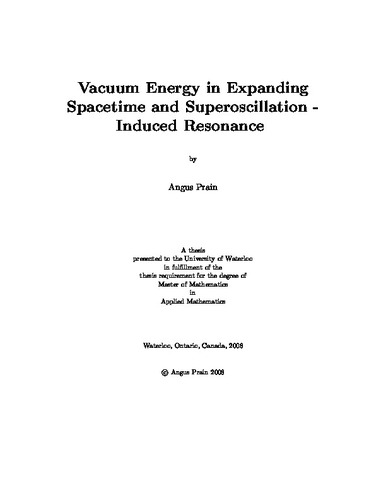 This thesis is divided into two parts. The first part is a study of the general problem of vacuum energy or so-called `zero point fluctuations' of a quantum field on expanding spacetimes and the interplay between the dilution of energy as a mode expands and the generation of energy as new modes enter from below the ultraviolet cutoff. The second deals with the phenomenon of superoscillations and some of the consequences in quantum theory and cosmology. Modern theoretical cosmology sits upon the theory of inflation which assumes that the universe underwent a period of accelerated expansion sometime in the past. Indeed, a whole new scientific discipline was born known as high precision observational cosmology when ground breaking detailed measurements were made in the late 1990's that confirmed some predictions of the theory of inflation. However, inflation is essentially a classical phenomenon with the inclusion of the quantum theory relegated to the provision of initial perturbations of an otherwise homogeneous and isotropic spacetime usually interpreted as the inexorable quantum fluctuations of a (classical) scalar field coupled to the metric. Quantum field theory on curved spacetime, on the other hand, has some novel features in comparison to it's flat spacetime cousin. The inclusion of some of these effects into a discussion of the novel inflationary picture should provide some very interesting and non-trivial insights to the very early universe and perhaps might shed some light on the fundamental nature of the gravitational interaction itself. Usually when studying quantum fields in curved spacetime and the energetic interaction between gravity and the quanta one works in the semi-classical picture where gravity remains a classical field. This is not only because a fully consistent quantum theory of gravity has not been constructed yet. Indeed, there should exist a presumably quite extensive regime where the picture of quantum fields propagating on a classical background remains a valid approximation. In the first part of this thesis we study this regime and some of the interesting physics that arises. Eventually, however, we go one step further than a semi-classical treatment and investigate the hypothesis that the dynamics of cosmologically significant spacetimes is provided by the spacetime dependence of the quantum vacuum energy of a scalar field on that spacetime. Put more simply, we discuss the possibility that the tendency for a spacetime to expand and accelerate it's expansion reduces to the statement that it is vacuum-energetically favorable to do so. The idea that the gravitational degrees of freedom are induced in this way is an old one due to Sakharov and is one represented in this thesis in simplified form and with specific calculations and examples. We find that such an interpretation is at least not excluded and, in fact, sits satisfactorily with the ideas of inflation. Along the way to our conclusive discussion of the `induced cosmology' we discuss, after briefly reviewing inflation and quantum field theory in curved spacetime, the general problem of vacuum energy in curved spacetime and some simplified models of the quantum mechanical ground state energy of a collection of harmonic oscillators on expanding spaces including some discrete models. Our philosophy throughout will be one of pragmatism; we assume a cutoff on momenta (or length scales) at an unspecified energy scale and assume our conclusions hold, if not all the way from the Planck scale (which would presumably be subject to beyond the standard model `quantum gravitational' effects), then at least in some meso-scale between the Hubble scale and the Planck scale. It is certainly true that a quantum scalar field really is a collection of independent harmonic oscillators one for each different comoving length scale (wavelength). The question that we seek to address in this thesis is ``what of the vacuum energy of those modes associated with neither the extreme ultraviolet (where ordinary field theory breaks down) nor the extreme infrared (where ordinary general relativity is assumed to break down)?". After discussing an infrared divergence which we find to be present in a larger class of powerlaw spacetimes than has been previously found, we also implement an infrared cutoff on energies. An interpretation of the infrared cutoff as the realization of a local expansion of a patch of an otherwise flat and very large `ambient' spacetime is attempted and the corresponding picture of an energetic initiation of inflation is provided. The phenomenon of superoscillations for bandlimited functions is the observation that a function may approximate to arbitrary precision a plane wave not contained in it's Fourier decomposition. In particular, it is possible for a function with compact support in the frequency domain to approximate with arbitrary precision a high frequency waveform outside of this support on an arbitrary long interval. This phenomenon has only recently begun to be studied in the literature and as yet very few quantitative results have been obtained. In the second part of this thesis we study the energetic response of a classical and quantum harmonic oscillator driven by a superoscillating driving force. We find that the oscillator indeed responds to the `imposter' driving force as if it were real and, dubbing the response `ghost resonance', we investigate some consequences in quantum field theory and cosmology.