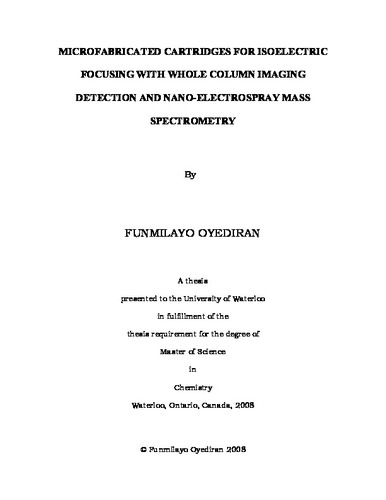 Microfluidic chips have gained wide applications in various fields, including medicine, environmental sciences and forensic investigations. They are used for the separation of proteins, blood, bacterial cell suspensions, antibody solutions, and drugs. Microfluidic chips display significant advantages, which include faster analysis time, reduced amounts of samples and reagents volumes, flexibility in design and increased separation efficiency. Whole column imaging detection (WCID) exhibits significant advantages compared to other detection methods that are widely used for detecting analytes after the separation of these analytes using isoelectric focusing. With these other methods, there is a need to mobilize the focused sample bands past the detector after separation but with WCID, there is no need for mobilization step. The aim of this research is further development of WCID by characterizing microfluidic chips fabricated for the detection system, to enhance its detection so that high efficiency can be obtained. The chips were fabricated using soft lithography technology at the Microfluidic laboratory, University of Waterloo and they were used to perform isoelectric focusing of various proteins in our laboratory. The fabricated chips with straight channel design were used to carry out isoelectric focusing of some proteins and the results obtained were compared with the results obtained using commercial cartridges. The chips with tapered channel design were used to carry out isoelectric focusing of proteins in which thermally generated pH gradient principle was employed. The samples after separation were sprayed into a mass spectrometer using nano-electrospray interface to obtain their molecular masses. Compatible cartridges for nano-electrospray mass spectrometer were developed and these cartridges were used to carry out capillary isoelectric focusing of low molecular pI markers and proteins. These cartridges were also connected to the nano-electrospray mass spectrometer to obtain the mass to charge ratios of some proteins. The fabricated microfluidic chips with straight channel design were also used to investigate the interaction between drugs and protein.