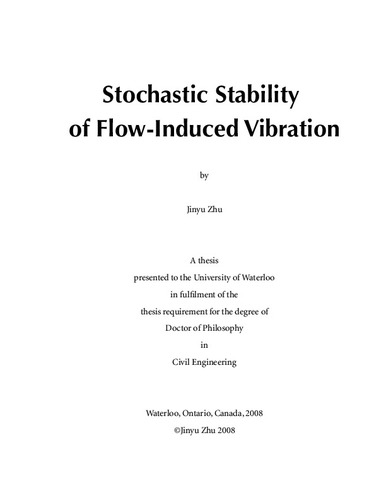 Flow-induced structural vibration is experienced in many engineering applications, such as aerospace industry and civil engineering infrastructures. One of the main mechanisms of flow-induced vibration is instability which can be triggered by parametric excitations or fluid-elastic forces. Experiments show that turbulence has a significant impact on the stability of structures. The objective of this research is to bridge the gap between flow-induced vibration and stochastic stability of structures. The flow-induced vibration of a spring-supported circular cylinder is studied in this research. The equations of motion for the cylinder placed in a cross-flow are set up, in which the vortex force is modeled by a bounded noise because of its narrow-band characteristics. Since the vibration in the lift direction is more prominent in the lock-in region, the system is reduced to one degree-of-freedom, i.e., only the vibration of the cylinder in the lift direction is considered. The equation of motion for the cylinder can be generalized as a two-dimensional system excited by a bounded noise. Stochastic analysis is used to determine the moment Lyapunov exponents and Lyapunov exponents for the generalized system. The results are then applied to study the parametric instability of a cylinder in the lock-in region. Fluidelastic instability can occur when the cylinder is placed in a shear flow. The equations of motion are established by using the quasi-steady theory to model the fluid-elastic forces. To study the turbulence effect on the stability of the cylinder, a real noise or an Ornstein-Uhlenbeck process is used to model the grid-generated turbulence. The equations of motion are randomized resulting in a four-dimensional system excited by a real noise. The stability of the stochastic system is studied by determining the moment Lyapunov exponents and Lyapunov exponents. Parameters of the system and the noise are varied to investigate their effects on the stability. It is found that the grid-generated turbulence can stabilize the system when the parameters take certain values, which agrees with the experimental observations. Many flow-induced vibration problems can be modeled by a two degrees-of-freedom system parametically excited by a narrow-band process modeled by a bounded noise. The system can be in subharmonic resonance, combination (additive or differential) resonance, or both if the central frequency of the bounded noise takes an appropriate value. The method for a single degree-of-freedom system is extended to study the stochastic stability of the two degrees-of-freedom system. The moment Lyapunov exponents and Lyapunov exponents for the three cases are obtained using a perturbation method. The effect of noise on various types of parametric resonance, such as subharmonic resonance, combination additive resonance, and combined subharmonic and combination additive resonance, is investigated. The main contributions of this thesis are stochastic stability analysis of one-degree-of-freedom systems and two-degree-of-freedom systems. Stability analysis for systems under the excitation of real noise and bounded noise is carried out by determining the moment Lyapunov exponents and Lyapunov exponents. Good agreement is obtained between analytical results and those obtained from Monte Carlo simulations. In the two degrees-of-freedom case, the effect of free stream turbulence on cylinder vibration and its stability is examined.