An Eurhythmatic Response to Adaptive Accrual: A Rhetoric of Adaptation 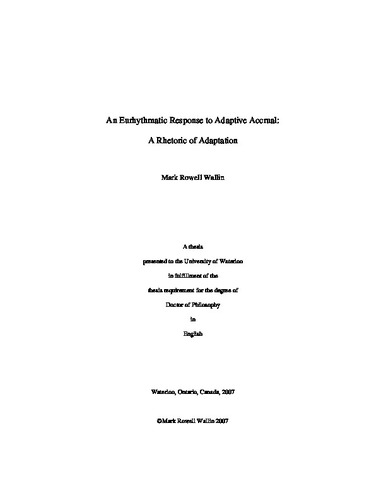 This dissertation applies to the study of adaptation principles of rhetoric, transtextual analysis and visual semiotics. It posits that adaptations are imitations-with-variations and that rather than existing in binary, one-to-one correspondence with their models, adaptations and their models accrue semiosis, forming large “megatexts.” These megatexts are composed of networks of associations that have meaning and change according to their contexts. Adaptation analysis becomes a matter of reading associations and textual linkages, or “reading through” the accrued texts. Eurhythmatic analysis, an analytical strategy drawn from both ancient and modern rhetoric, accounts for these variations while emphasizing the material contexts out of which variations emerge. This project uses these rhetorical strategies to address issues particular to new media adaptations, such as the nature of authorial ethos and identity in a marketplace of competing adaptations and collaborative creation. It examines the process of rhetorical identification that occurs in video game adaptations which ostensibly claim the same model, yet vie for legitimacy – children squabbling for the birthright of the recognized heir. Finally, this thesis examines the new adaptive possibilities opened up by the DVD anthologizing process whereby diverse texts are brought under a titular umbrella. These texts and the navigational overlays designed to constrain and control them, blur the otherwise clear boundaries between adaptation and model, between inside and out. In transtextual terms, this distinctive adaptive form is an internal hypertext, or an adaptation situated on the threshold that distinguishes the paratext from the hypertext.