Portraits of a Landscape & The Trouble With Eden 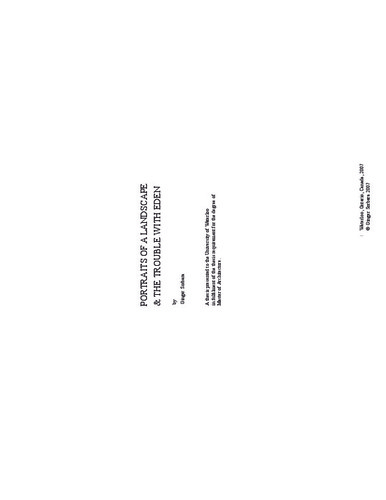 If there was ever a question about the subject of this work, I had only to return to the landscape. There was a strangness, a newness, an inevitability to those urban spaces around the city that insisted on my attention. Those landscape, often called suburban, of subdivision homes, strip plazas, malls and big box stores, of arterial roadways and parking lots, ascendant since the middle of the twentieth century, have overwhelmed their host cities and now claimed urban dominance in North America. My interest in the sprawl landscapes started with the homes that occupy them. Sprawl is made up mostly of housing. The essence of this circumferential city of sprawling growth is the home. If there is a unifying element in the wildly-different suburbs built over the last two centuries, it is that they are wrought on the foundation of the suburban home. The idea of the home as centre of the suburb didn’t take root until after the war, when the lack of affordable housing became a matter of national concern. In Redesigning the American Dream: The Future of Housing, Work, and Family Life, Dolores Hayden argued that by the 1950s, the American suburban house had become a private utopia. The home -- something separate from its neighbours and separate from its community, an ideal in and of itself - is both the beginning and the essence of sprawl. In 1950 the average size of a new home was 800 square feet, 1,500 in 1970, 2,190 in 19981. The home as a symbol of the American, Canadian, indeed the industrialized dream, took hold in the-postwar environment and bore the offspring we call sprawl. Although the sprawl landscape is inextricably connected to the single family home, it has evolved into a post industrial cityscape, a place that is in fact, but not in feel, urban. What is the nature of this strange place? How and why does it differ from the industrial urban landscape? And what are the phenomena that propel the building of this place. I set out to understand this landscape by looking for its proponents, but in the end couldn’t fi nd any. I didn’t talk to anyone - see, hear, or read anything - that explained the changes in the landscape as a function of an urban ideology or even a choice. Duany Plater-Zyberk argue that “[w]e live today in cities and suburbs whose form andcharacter we did not choose. They were imposed upon us, by federal policy, local zoning laws, and the demands of the automobile2”. Most of the literature - books, websites, government and non government studies - bemoan the expansion of the sprawl landscape, and criticize our inability to plan our way out of it. The sprawl landscape, the landscape characterized in large part by the subdivided tract homes is, virtually, without a social or cultural advocate. It is a place that seems to have been built for everyone, without anyone advocating on its behalf. From homes to highways, the landscape, whose photographs make up this work, was for me, the discovery of a place with which I was almost too familiar to see. The images bear witness to the changing urban condition; they are a documentation of our rural spaces as they are annexed by the sprawl that, like a wave, has rolled over virtually every major city in North America.