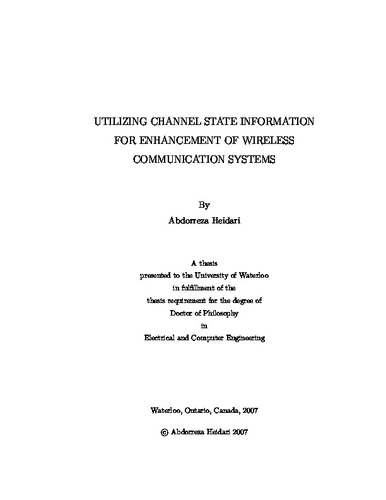 One of the fundamental limitations of mobile radio communications is their time-varying fading channel. This thesis addresses the efficient use of channel state information to improve the communication systems, with a particular emphasis on practical issues such as compatibility with the existing wireless systems and low complexity implementation. The closed-loop transmit diversity technique is used to improve the performance of the downlink channel in MIMO communication systems. For example, the WCDMA standard endorsed by 3GPP adopts a mode of downlink closed-loop scheme based on partial channel state information known as mode 1 of 3GPP. Channel state information is fed back from the mobile unit to the base station through a low-rate uncoded feedback bit stream. In these closed-loop systems, feedback error and feedback delay, as well as the sub-optimum reconstruction of the quantized feedback data, are the usual sources of deficiency. In this thesis, we address the efficient reconstruction of the beamforming weights in the presence of the feedback imperfections, by exploiting the residual redundancies in the feedback stream. We propose a number of algorithms for reconstruction of beamforming weights at the base-station, with the constraint of a constant transmit power. The issue of the decoding at the receiver is also addressed. In one of the proposed algorithms, channel fading prediction is utilized to combat the feedback delay. We introduce the concept of Blind Antenna Verification which can substitute the conventional Antenna Weight Verification process without the need for any training data. The closed-loop mode 1 of 3GPP is used as a benchmark, and the performance is examined within a WCDMA simulation framework. It is demonstrated that the proposed algorithms have substantial gain over the conventional method at all mobile speeds, and are suitable for the implementation in practice. The proposed approach is applicable to other closed-loop schemes as well. The problem of (long-range) prediction of the fading channel is also considered, which is a key element for many fading-compensation techniques. A linear approach, usually used to model the time evolution of the fading process, does not perform well for long-range prediction applications. We propose an adaptive algorithm using a state-space approach for the fading process based on the sum-sinusoidal model. Also to enhance the widely-used linear approach, we propose a tracking method for a multi-step linear predictor. Comparing the two methods in our simulations shows that the proposed algorithm significantly outperforms the linear method, for both stationary and non-stationary fading processes, especially for long-range predictions. The robust structure, as well as the reasonable computational complexity, makes the proposed algorithm appealing for practical applications.