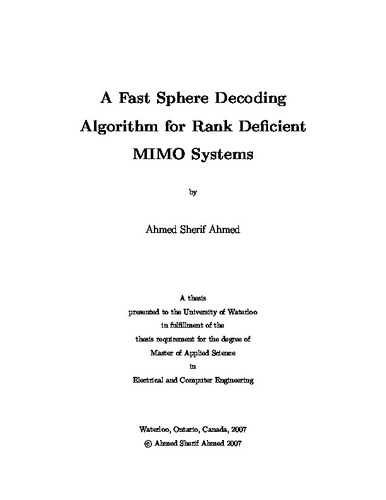 The problem of rank deficient multiple input multiple out (MIMO) systems arises when the number of transmit antennas M is greater than number of receive antennas N or when the channel gains are strongly correlated. Most of the optimal algorithms that deal with uncoded rank-deficient (under-determined) V-BLAST MIMO systems (e.g. Damen ,Meraim and Belfiore) suffer from high complexity and large processing time. Recently, some new optimal algorithms were introduced with low complexity for small constellations like 4-QAM yet they still suffer from very high complexity and processing time with large constellations like the 16 QAM. In order to reduce the complexity and the processing time of the decoding algorithms, some suboptimal algorithms were introduced. One of the most efficient suboptimal solutions for this problem is based on the Minimum mean square error decision-feedback equalizer (MMSE-DFE) followed by either sphere decoder or fano decoder. The performance of these algorithms is shown to be a fraction of dB from the maximum likelihood decoders while offering outstanding reduction in complexity compared to the most efficient ML algorithms (e.g. Cui and Tellambura algorithm). These suboptimal algorithms employ a two stage approach. In the first stage, the channel is pre-processed to transform the original decoding problem into a simpler form which facilitates the search decoding step. The second stage is basically the application of the sphere decoding search algorithm in the case of MMSE-DFE sphere decoding step or Fano decoder in the case of MMSE-DFE Fano decoder. In this study, various algorithms which deal with rank deficient MIMO systems such as Damen,Meraim and Belfiore algorithm ,Dayal and Varansi algorithm, and Cui and Tellambura algorithm are discussed and compared. Moreover, the MMSE-DFE sphere decoding algorithm and MMSE-DFE fano decoding algorithm are applied on uncoded V-BLAST rank deficient MIMO systems. The optimality of MMSE-DFE sphere decoding algorithm is analyzed in the case of V-BLAST 4-QAM. Furthermore, Simulation results show that when these algorithms are extended to cover large constellations, their performance falls within a fraction of dB behind the ML while achieving a significant decrease in the processing time by more than an order of magnitude when compared to the least