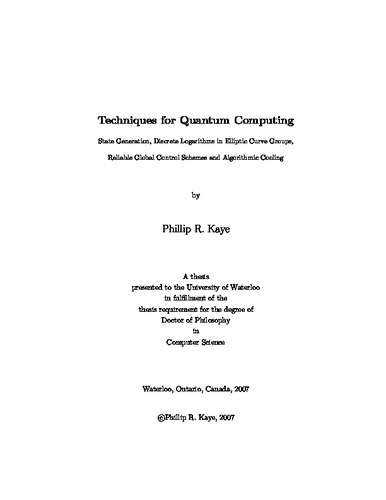 This thesis is about techniques for quantum computing. A common theme throughout this work is the examination of how quantum algorithms and protocols might be implemented in practice. I explore this question at the level of algorithmic details and computer architecture, and not at the level of specific physical systems for performing quantum computation. The first problem I consider is the generation of quantum states. Many results in quantum information theory require the generation of specific quantum states, such as Bell states. Some states can be efficiently created using standard quantum computational primitives such as preparing a qubit in the state |0> and applying a sequence of quantum gates (from a finite set). For example, a Bell state can be prepared from the state |00> using a Hadamard gate and a controlled-NOT gate. However, many states cannot be efficiently created. Chapter 1 of this thesis focusses on the generation of quantum states. In Chapter 2, I explore implementations of Shor's quantum algorithm for computing discrete logarithms. This algorithm is particularly significant because it threatens to undermine the security of widely used elliptic curve cryptosystems. I give a strategy for implementing Shor's algorithm for finding discrete logarithms in groups of points on elliptic curves over fields of characteristic 2. Chapter 3 is about globally controlled arrays, which is a paradigm for implementing quantum computers that may prove to be more feasible in practice than the quantum circuit model. I explore strategies for implementing error correction in such global control models, so that they might be implemented more robustly. I also cast the various global control schemes that have appeared in the literature into a unified framework so that their properties can be studied somewhat independently of the differences in low-level details. Using this framework, I consider the main challenges and obstacles to implementing quantum computing fault tolerantly using globally controlled arrays. Finally, in Chapter 4, I consider algorithmic cooling---a technique that is potentially important for making quantum computation using nuclear magnetic resonance (NMR) feasible. Given the constraints imposed by the NMR approach to quantum computing, the most likely cooling algorithms to be practicable are those based on simple reversible polarization (RPC) operations acting locally on small numbers of bits. Algorithms using 2- and 3-bit RPC operations have appeared in the literature, and these are the algorithms I consider in Chapter 4. Specifically, I show that the RPC operation used in all these algorithms is essentially a majority-vote of 3 bits, and prove the optimality of the best such algorithm (in a restricted setting). I go on to derive some theoretical bounds on the performance of these algorithms under some specific assumptions about errors. These bounds are independent of implementation details and low-level algorithmic details.