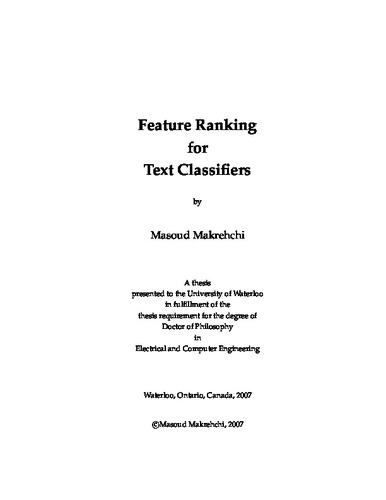 Feature selection based on feature ranking has received much attention by researchers in the field of text classification. The major reasons are their scalability, ease of use, and fast computation. %, However, compared to the search-based feature selection methods such as wrappers and filters, they suffer from poor performance. This is linked to their major deficiencies, including: (i) feature ranking is problem-dependent; (ii) they ignore term dependencies, including redundancies and correlation; and (iii) they usually fail in unbalanced data. While using feature ranking methods for dimensionality reduction, we should be aware of these drawbacks, which arise from the function of feature ranking methods. In this thesis, a set of solutions is proposed to handle the drawbacks of feature ranking and boost their performance. First, an evaluation framework called feature meta-ranking is proposed to evaluate ranking measures. The framework is based on a newly proposed Differential Filter Level Performance (DFLP) measure. It was proved that, in ideal cases, the performance of text classifier is a monotonic, non-decreasing function of the number of features. Then we theoretically and empirically validate the effectiveness of DFLP as a meta-ranking measure to evaluate and compare feature ranking methods. The meta-ranking framework is also examined by a stopword extraction problem. We use the framework to select appropriate feature ranking measure for building domain-specific stoplists. The proposed framework is evaluated by SVM and Rocchio text classifiers on six benchmark data. The meta-ranking method suggests that in searching for a proper feature ranking measure, the backward feature ranking is as important as the forward one. Second, we show that the destructive effect of term redundancy gets worse as we decrease the feature ranking threshold. It implies that for aggressive feature selection, an effective redundancy reduction should be performed as well as feature ranking. An algorithm based on extracting term dependency links using an information theoretic inclusion index is proposed to detect and handle term dependencies. The dependency links are visualized by a tree structure called a term dependency tree. By grouping the nodes of the tree into two categories, including hub and link nodes, a heuristic algorithm is proposed to handle the term dependencies by merging or removing the link nodes. The proposed method of redundancy reduction is evaluated by SVM and Rocchio classifiers for four benchmark data sets. According to the results, redundancy reduction is more effective on weak classifiers since they are more sensitive to term redundancies. It also suggests that in those feature ranking methods which compact the information in a small number of features, aggressive feature selection is not recommended. Finally, to deal with class imbalance in feature level using ranking methods, a local feature ranking scheme called reverse discrimination approach is proposed. The proposed method is applied to a highly unbalanced social network discovery problem. In this case study, the problem of learning a social network is translated into a text classification problem using newly proposed actor and relationship modeling. Since social networks are usually sparse structures, the corresponding text classifiers become highly unbalanced. Experimental assessment of the reverse discrimination approach validates the effectiveness of the local feature ranking method to improve the classifier performance when dealing with unbalanced data. The application itself suggests a new approach to learn social structures from textual data.