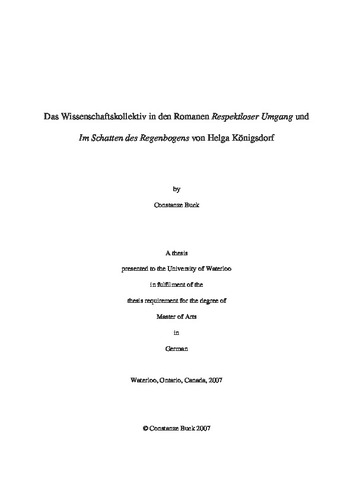 The author Helga Königsdorf, a scientist herself, deals in several of her literary works with the situation of the scientist in the GDR. The aim of this thesis is to explore the image of the scientist within the two novels Respektloser Umgang and Im Schatten des Regenbogens. The first novel was published before reunification and has received much critical attention, while the second novel appeared after the collapse of the state and has not been as extensively examined. The investigation of this thesis focuses on the portrayal of the various scientists that appear in the two novels. This thesis is divided into three parts. The first part provides an introduction to the situation of the scientist before and after the ‘Wende’. The question arises whether or not there is a radical change in the portrayal of the scientists in the novels, and how this change is manifested. The second part deals with the historical context that underpins my analysis, in particular, with regard to the fate of scholars in the former GDR. It also contains a short discussion of Helga Königsdorf, both as a person and a scientist. Part three provides a close analysis of each of both novels. Aspects such as the sense of responsibility or the lack thereof in regard to science and relationships between colleagues, friends and family are examined. In order to show how the portrayal of the scientist develops, a comparison of the novels is undertaken. It becomes evident that radical changes occurred not only on the professional, but also on a personal level. This thesis provides a first comparison of two major works by Helga Königsdorf and gives insight into the changing literary portrayal of the scientist in the former GDR during the process of unification.