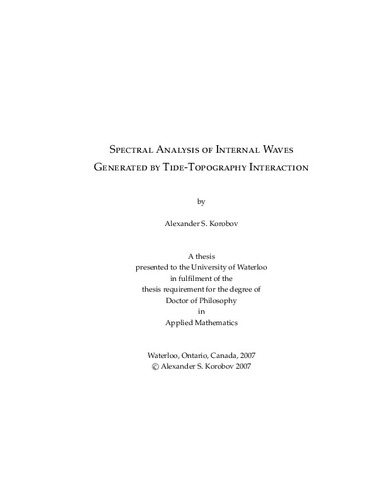 Internal waves in the deep ocean play a deciding role in processes such as climate change and nutrient cycles. Winds and tidal currents over topography feed energy into internal waves at large scales; through nonlinear interaction the energy then cascades to turbulence scales and contributes to deep-ocean mixing. The connection of internal waves to deep-ocean mixing is what makes them important. In this thesis we address the problem of energy transfer in internal waves by modelling a two-dimensional flow over idealized topography and analysing the spectra of the generated wave fields. The main tool used is the nonparametric spectral analysis, some aspects of which are reviewed in one of the chapters. The numerical experiments were performed for a number of latitudes, topographies and background flows. The wave field generated by tide-topography interaction includes both progressive and trapped internal waves. The wave spectrum was found to exhibit a self-similar structure with prominent peaks at tidal harmonics and interharmonics, whose magnitudes decay exponentially as a function of the frequency. Subharmonics are generated by an instability of tidal beams, which is particularly strong for near-critical latitudes, where the Coriolis frequency is half the tidal frequency; other interharmonics are produced through resonant and non-resonant triad wave-wave interaction. As the triad interaction can be either resonant or non-resonant, some harmonics and interharmonics correspond to progressive waves, if the frequency is within the free internal wave range, while the others are trapped waves if the frequency is outside the range. Spatial scales of harmonics and interharmonics were investigated. In particular, it was shown that interharmonics typically have smaller vertical scales. Through the use of spatial analysis it was shown that there is a discrete number of wave-wave interactions responsible for the total energy transfer. The results of the thesis provide insight into the complex nature of internal wave interactions and may be helpful for interpreting recent observational results.