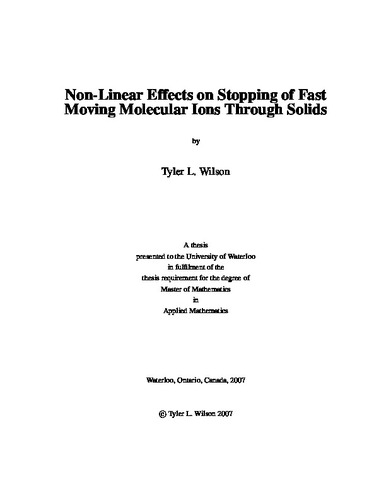 This thesis studies the non-linear (Barkas) effects on stopping of fast moving molecular ions through solids. We model the solid target by a rigid lattice of positive ion cores surrounded by a gas of electrons. To model the electron gas we use a hydrodynamic model with a Thomas-Fermi-von Weizsacker expression for the internal energy. The disturbance to the charge density and velocity profile of the gas due to the intruder is assumed small and a perturbation expansion is used. The gas is assumed to be initially at rest. A derivation for the first and second order stopping force on an projectile due to the induced charge density of the target is given. Structure factors are introduced to capture the physics relating to the structure of the projectile and to allow maximum flexibility and generalization. The second order stopping force is calculated using a novel ”holepunch” integration method and is compared to other available methods. Results are obtained for the case of a dicluster of protons which are colinear with their direction of motion as well as for a dicluster of protons which are randomly oriented incident on an aluminum target and compared to the single proton case.