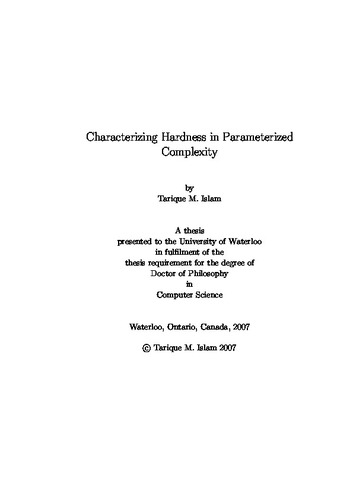 Parameterized complexity theory relaxes the classical notion of tractability and allows to solve some classically hard problems in a reasonably efficient way. However, many problems of interest remain intractable in the context of parameterized complexity. A completeness theory to categorize such problems has been developed based on problems on circuits and Model Checking problems. Although a basic machine characterization was proposed, it was not explored any further. We develop a computational view of parameterized complexity theory based on resource-bounded programs that run on alternating random access machines. We develop both natural and normalized machine characterizations for the W[t] and L[t] classes. Based on the new characterizations, we derive the basic completeness results in parameterized complexity theory, from a computational perspective. Unlike the previous cases, our proofs follow the classical approach for showing basic NP-completeness results (Cook's Theorem, in particular). We give new proofs of the Normalization Theorem by showing that (i) the computation of a resource-bounded program on an alternating RAM can be represented by instances of corre- sponding basic parametric problems, and (ii) the basic parametric problems can be decided by programs respecting the corresponding resource bounds. Many of the fundamental results follow as a consequence of our new proof of the Normalization Theorem. Based on a natural characterization of the W[t] classes, we develop new structural results establishing relationships among the classes in the W-hierarchy, and the W[t] and L[t] classes. Nontrivial upper-bound beyond the second level of the W-hierarchy is quite uncommon. We make use of the ability to implement natural algorithms to show new upper bounds for several parametric problems. We show that Subset Sum, Maximal Irredundant Set, and Reachability Distance in Vector Addition Systems (Petri Nets) are in W[3], W[4], and W[5], respectively. In some cases, the new bounds result in new completeness results. We derive new lower bounds based on the normalized programs for the W[t] and L[t] classes. We show that Longest Common Subsequence, with parameter the number of strings, is hard for L[t], t >= 1, and for W[SAT]. We also show that Precedence Constrained Multiprocessor Scheduling, with parameter the number of processors, is hard for L[t], t >= 1.